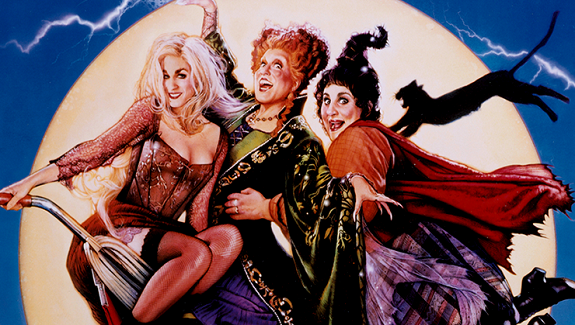 My favorite Halloween movie of all time is Hocus Pocus, a Disney film made on July,16,1993. It is a funny family movie directed by Kenny Ortega who also directed Descendants, all of the High School Musical movies, and Newsies. The movie is about Max, a boy who moved to Salem with his sister Dani.

They explore an abandoned house with  their new friend, Allison. After dismissing a story Allison tells as superstitious, Max accidentally frees a coven of evil witches named the Sanderson sisters who used to live in the house. With the help of a magical cat, the kids must steal the witch’s’ book of spells to stop them from becoming immortal.

There are many funny moments in the movie that I love and cherish. A featured song in the movie is “Come Little Children” sung by Sarah Jessica Parker as Sarah Sanderson. The three witch sisters names are Winifred the oldest sister (Bette Midler), Sarah the youngest sister (Sarah Jessica Parker) and Mary Sanderson the middle sister (Kathy Najimy). Hocus Pocus has a 30% rating on rotten tomatoes and 91% of google users liked the movie.The movie is 1 hour and 36 minutes long. You can get it on YouTube, iTunes, and Amazon Video for $2.99.