Movie review: ‘The Nightmare Before Christmas’ is my favorite stop motion movie 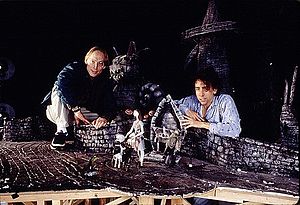 My all time movie of the Halloween theme is The Nightmare Before Christmas. Now some people might disagree with me that it’s a Halloween film but in my opinion it counts as both a Christmas and  Halloween movie.

It was released On October 13, 1993 in the United States.It tells the story of Jack Skellington, a resident from “halloween Town” who stumbles through a portal to “ChristmasTown” and decides to celebrate the holiday, with some dastardly and comical consequences. Danny Elfman wrote the songs and Score, and provided the singing voice of the main character Jack.

The main reason I love this Tim Burton film is because I appreciate how much time and dedication went into this stop motion feature. If the animators happened to mess up a certain scene or let’s say they didn’t move the face of one of the characters in one of the frames they would have to reshoot the whole scene to make sure it flowed properly.

While I’m sure it was a tedious 3 years making the film ,but I have little to no doubt that the whole team was proud of their work especially since they were nominated for best visual effects which was a first for an animated film.

A interesting fact about the film itself is that The Nightmare Before Christmas originated in a poem written by Tim Burton in 1982, while he was working as an animator at Walt Disney feature animation.It was also the first stop-motion animated feature to be entirely converted to 3D.

have a love for stop motion like I do this movie is definitely for you.