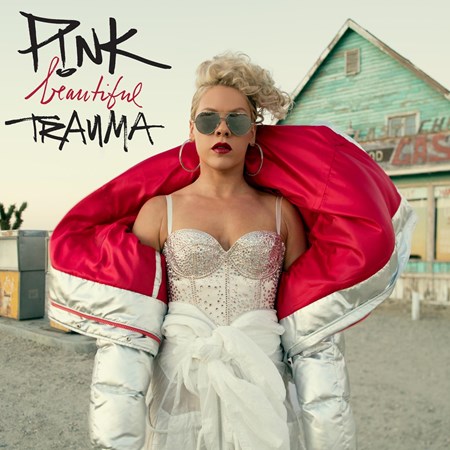 My name is Autumn Yoder, I’m in 8th grade and I’m in love with the musical artist Alecia Moore, better known at P!nk. I’ve listened to her music since I was young, and I don’t regret a bit of it.

On September 28, 2017 P!nk released “Beautiful Trauma”, a promotional single for her upcoming album, followed by “Whatever You Want” as the second on October 5, 2017.

The upcoming album was called Beautiful Trauma, a look into trouble about love. The album has 13 songs in total, in which I will be going over every song’s meaning. I suggest that you listen to the songs as I review them, you don’t really have to. Click on the song name to pull the song up. I will include more information on P!nk at the bottom of this review. This will be a very in-depth review, so if you have no patience then go find another review to look at. WARNING: there is some vulgar language, so you’ve been warned.

The first song on the album, “Beautiful Trauma”, details P!nk’s life with her husband, Carey Hart, earlier in life. This song describes how before they weren’t perfect together. One of the lyrics, “We were on fire, I slashed your tires,” tells of Thanksgiving 2004, where P!nk quite literally slashed her husband’s tires after a fight. “My perfect rock bottom, my beautiful trauma,” shows that P!nk doesn’t care, and loves him even if they weren’t the greatest couple, and she comes back (almost) every time.

P!nk sings with Eminem on this track, singing/rapping her story of how Carey emotionally hurt her, and she wants to take revenge on him. P!nk and Eminem are singing in response to each other, showing both sides of the story. “I wish I was a lawyer, I would sue you, sue you, take your dog, take your house. Take your shoes, take your heart,” describes P!nk in a state of “screw you, I’ll take all you’ve got”.

Song 3: Whatever You Want (Explicit language)

“Whatever You Want” is P!nk showing that their relationship is falling apart, because Carey just doesn’t seem to care at all about her. She still wants it to work, however, and wants to talk it over and fix it, because quote, “I feel like our ship’s going down tonight, but it’s always darkest before the light.” Past their hardships, she still loves him, and quote, “‘Cause you’re the one I wanna sink with.”

Song 4: What About Us

“What About Us”, the fourth song on the album is the best known song, playing often on the radio. The message in this is not only to her, but to everyone who’s having problems in their relationships. In the lyric, “We are billions of beautiful hearts, and you sold us down the river too far,” P!nk wants everyone to know that they are beautiful, but even as beautiful as P!nk herself, not everyone has the strength to pull themselves out of a bad relationship. “Sticks and stones, they may break these bones, but then I’ll be ready, are you ready?” As you are damaged, you can grow stronger and learn from that pain, or that mistake. So, once you’ve had enough, enough is enough, and you can get help or help yourself.

This track literally describes how P!nk and Carey lost their spark in love, and it just wasn’t the same. “There’s a stranger, he’s lying in my bed, kinda blank like the thoughts living in my head,” is her explaining that he felt like a stranger to her, not knowing what to feel. “No love, you hold me close, but I don’t feel much,” Is speaking again on the idea that she doesn’t feel very much love for him anymore. “Still the girl that you chased all around the world,” Carey stuck by her as she toured everywhere, and she’s still chasing her own dreams, like Carey used to follow in tow.

“Barbies” Is P!nk wishing that she could be young again, and as said in the song, “I wish I could go back to playing barbies in my room, they never say you gotta grow up, quite this soon,” She misses that part of her life. The reason being, is that everything has changed, seen in the lyric, “Another day, another sin, another day I’m late again. Oh, just like that my money’s spent, where did it all go?”

“Where We Go” describes the two lovers had it fixed, but the love broke again, and they just don’t know what to do anymore. “Write my name up in the sky as we contemplate goodbye. I don’t know, we don’t know, where we go.” They’re not sure whether to break up or stay.

“Remember that time we were just kickin’? But nothing had changed, nothing was really different,” Their love was the same, until, “Then love showed its teeth like it’s something vicious,” and they began slowly breaking apart. P!nk, even though they’re clearly not working out the best, still wants to be with him, seen in the lyrics, “Can we just freeze frame, pause, rewind, stop, and get back to the feelings we think we lost? For now.”

“Secrets”, the ninth song on the album is talking about the secrets that they hide from each other, and P!nk wants to share them. “What do we conceal? What do we reveal? Make that decision everyday,” is showing the idea that EVERYONE has a secret, and we consciously decide to hide things from people. “I let the walls come down, I let the monster out, and it’s coming after me,” is visibly showing the consequences of sharing secrets, that maybe you shouldn’t have.

Song 11: I Am Here (Explicit language)

In “I Am Here”, P!nk had decided that she’s no longer afraid of falling. “I’ve already seen the bottom, so there’s nothing to fear, I know that I’ll be ready when the devil is near,” Is her explaining that she’s already seen the roughest bits, and this is nothing. “I can think of one thousand places much worse than this,” also shows that it’s nothing compared to other things.

“Wild Hearts Can’t Be Broken” is P!nk telling the world that she’s strong, and won’t stop trying to push forward until she wins, seen in, “This is my rally cry, I know it’s hard, we have to try. This is a battle I must win, to want my share is not a sin.” She’s determined to finish what’s started, stated in the lyric, “There’s not enough rope to tie me down, there’s not enough tape to shut this mouth. The stones you throw can make me bleed, but I won’t stop until we’re free.”

All in all, P!nk’s “Beautiful Trauma” album was great, and very meaningful, powerful. If you like the music, share it, get out a good message. P!nk has always had such a powerful attitude and strength in her music, and never disappoints. Listen to more of her music and explore a little, because it’ll show you a whole different side of life.

Credit to P!nk – Topic for all of the music. A lot of P!nk’s music is there, so go explore the channel.