Elf On The Shelf: Cute Or Creepy? 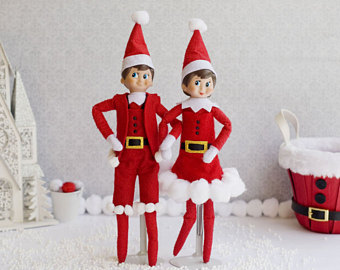 ?The Elf On The Shelf was written by Carol Aebersold and Chanda Bell in 2004. They wrote the book about an elf who acts as a scout for Santa, watches over children of all ages and tells Santa if they have been naughty or nice. In the back of each Elf On The Shelf book you are able to choose what your elf’s name is. They come around Thanksgiving and Christmas Eve. They can even come around your birthday or halloween if you’re lucky.

For some people the Elf On The Shelf may come off as a creepy because some leave creepy or unsettling notes. They can sometimes look scary or cute depending on the type of elf you get,the two types are the bad and the good elf. Some people have spotted the elf doing naughty or unpleasant things and do not think the elf on the shelf is a good for kids.

Autumn Yoder, 8th grader, said she thinks the elf on the shelf is creepy.“My mom used to put it on the shelf in my room looking down at me every night.”Autumn said,”I climbed up to the shelf, knocked it down and ripped it up.” Gillian Graver, 8th grader said “Creepy, because who wants an elf moving around your house with those cold dead eyes.”

Ayana Freeman, 7th grader says it is creepy because “It moved one time when I didn’t touch it and it smiles creepy.” I think we should get rid of it,and I threatened to get rid of it once.” Kamryn Lovett,8th grader says she thinks the elf on the shelf is cute.” They do crazy things in the morning and they create stuff or do stunts.

Many more people think the elf on the shelf is creepy rather than cute. What do you think about the tradition,cute or creepy?