Personal view: Everyone is Equal 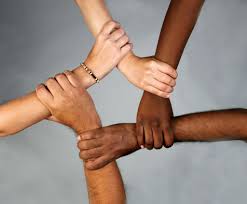 We believe everyone is equal, we are all humans, and we all breathe,eat, and sleep. No one should be treated differently just because of the tone of their skin or what they wear on their head. Nowadays most people are homophobic or racist. “Why do we make a big deal about black slaves and not white slaves?” There are no movies about white slaves but yet there are hundreds about black slaves. Why is this?

Growing up as young African American females, we’ve learned to love our skin color and not listen to what negative people say. Everyday there are thousands of women and men in every shade of ‘black’ that are fighting for my rights.

It’s so horrific that black people can’t even walk to the corner store to get a snack without someone accusing them of stealing. Or when a Muslim wears a hijab and someone all of the sudden thinks their a terrorist.

We’re embarrassed by this society we live in today. Racial discrimination should be huge too, it reminds me about feminism because of how women are paid lower than men. Martin Luther King Jr., Rosa Parks, Angela Davis, are some of the civil rights activist.

We find it sad how you as a human being, sitting down for the Pledge of Allegiance is disrespectful but yet in the pledge it says “Liberty and justice of all” but there isn’t justice for black people hardly. For example Travon Martin, simply got shot because he was wearing a hoodie. Black people are struggling everyday because of white police officers. We think Justice should be equally served to ALL.

To this day, racism is still inhumane and vicious. Everyone should be treated the with the same amount of rights. It shouldn’t matter if your skin color is darker than others. What the whites did to the blacks was not ok. They killed, bruised, whipped, hung, & raped the blacks simply because of the color of their skin. How could they possibly think this is okay? What made them think that God made them any better than the blacks?