You Don’t Have To Go To The Dance, But It’s Better If You Do 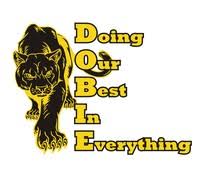 The school dance is coming up soon and people all over Dobie are frantically getting ready. Finding what to wear is probably one of the biggest struggles for all of the students planning to attend, with outfits ranging from casual to cosplay. With so many options making a decision can be stressful, but there are definitely some interesting ones.

Max Belbin, 7th grade, is going to the dance in a white button up and black slacks, but there’s a twist. His formal outfit is from a specific bands music video, the bowtie and mask giving it away as Panic! At The Disco’s But It’s Better If You Do. He and Cathryn Booker are dressing up as the lead singer, Brendon Urie, and his wife. “We had planned it for months before, but I never really thought she was serous until she came over to my house with clay and gold paint.” Says Max when asked how the idea came to be.

Cat Booker says that she came up with the idea when Max was talking about Halloween, considering their mutual love for the band and cosplay. But It’s Better If You Do is off of the album A Fever You Can’t Sweat Out, which both Cat and Max own a physical CD of. “It’s going to be great, I’m pumped.” says Cat.

Another student planning to attend the dance is Sydney Lloyd, 7th grader. She’s very excited to go to the dance in her black flowery romper from H and M. Although she isn’t looking forward to the Kidz Bop, she’s hoping SweatShirt by Jacob Sartorius is played. Her electives are band and CCR, and she is excited to go to the dance with her fellow band member, Mackenzie Owen. Mackenzie is also in 7th grade, and is excited to see what a school dance is like. She is wearing a black dress for Hollister, and hopes to rock the Macarena.

Sophia Avitva, also 7th grade, is going to the dance with friends. She and her friends are planning to dress in casual dresses and rocking out to 24K Magic by Bruno Mars. “I guess I just want to see what a school dance is like.” she said.