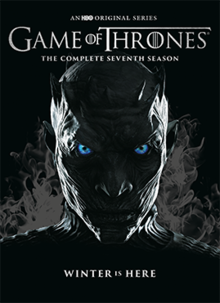 Game of Thrones is a fantasy drama television series created by David Benioff and D. B. Weiss. The GOT (Game of Thrones) series has very explicit content, including nudity, killing, gore, and rape. Although aside from those, the story is truly amazing.

In GOT season seven the show focuses on Daenerys Targaryen and Jon Snow, along with the Lannisters, and Stark’s. It also focuses on homecomings. For example Daenerys returns to Dragonstone, where she was born during a great storm in the memory of Westeros, that is why they also call her Daenerys Stormborn.

I really enjoyed season seven because there were more dragon action, and white walkers. It was a very short season with seven episodes. I enjoyed how they focused on the attraction between Daenerys Targaryen and Jon Snow.

Jon Snow left Winterfell to attain some dragon glass from Dragonstone to kill the white walkers. When Jon meets Daenerys there’s some humor. Missandei tells Jon all of Daenerys’s titles “Daenerys Stormborn of the House Targaryen, First of Her Name, the Unburnt, Queen of the Andals and the First Men, Khaleesi of the Great Grass Sea, Breaker of Chains, and Mother of Dragons.”

Bravos Seaworth who accompanied Jon Snow to Dragonstone also said his title. “This is Jon Snow, king of Winterfell.” A moment of silence followed. Daenerys doesn’t believe what Jon Snow is saying about the white walkers so she refuses to give him the dragon glass. Although Daenerys made an offer, if Jon Snow where to “bend the knee” she would allow him to mine the dragon glass, but Jon refuses. So, Daenerys makes him her prisoner, although he is a prisoner with benefits who is able to go where ever he wishes.

When Jon Snow left Winterfell he put his sister in charge, Sansa Stark. A lot happens while Jon is gone. Arya Stark returns, so does Bran Stark, who is the three-eyed raven. That’s another homecoming.

Jorah Mormont returns to Daenerys, he got touched by “Stone Men” who didn’t survive a disease called “Greyscale.” Daenerys sent him away to get cured. Sam who was working for Maesters, saw Jorah and wanted to cure his Greyscale, but it was a huge risk because no one survived. The Maesters wouldn’t allow him to do it, he ends up doing it though. Let me tell you, it was a very painful process for Jorah. Sam leaves after Jorah because he found out how to defeat the white walkers, which was the reasons for going there in the first place, and where to get the dragon glass. That’s when Jon goes to Dragonstone.

When Daenerys finds out about the white walkers and believe in them, Jon and her both decide that they need to be defeated first before they go to Westeros. They aren’t on good terms with the Lannisters, firstly because Daenerys flies her dragon Drogon, bringing the Dothraki along and burns Jaime Lannister’s army, and captures the soldiers that are alive and killed the ones who didn’t “bend the knee.” Well it was Drogon who killed them

Sandor Clegane, (a.k.a The hound) along with the brotherhood, arrives at Dragonstone, and that is a whole other story. Sandor saw things in the fire and knew about white walkers so they went to Dragonstone.

In order for any of Daenerys’s dragons not to die she leaves leaving Jon Snow, he survives though, saved by his uncle. They got the white walker in the end.