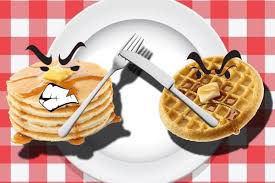 When it comes to the breakfast food Pancakes and Waffles facts online state that they are exactly the same except that sometimes the mixtures of the two can be different because of its  fat content. Even though these are the facts many others have a different opinion.

Tamyra Daniels in the 8th grade believes they’re the same.

“Because you use the exact same batter to cook them.” claims Daniels.

But Daniels also says that waffles are better because, “Waffles don’t get as soggy as pancakes do.”

Someone who is completely opposite from Daniels would be Yvea Minor-Smith in the 8th grade. When asked if the two were the same Smith said, “No, because they look different.” and said she preferred pancakes because, “…they made IHop.”

8th grader Anayah Butler seems to agree with the opinions of Smith. When she answers that they’re not the same she claims, “Because a pancake is flat and a waffle has holes, and its thick and round.”

In conclusion all people have a different opinion when it comes to Pancakes and Waffles. Which do you prefer?