What fans expect for the new Fantastic Beasts movie 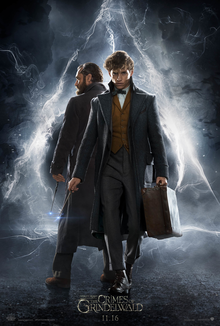 All Harry Potter fans probably know about the new movie coming out, Fantastic Beasts: The Crimes of Grindelwald. If you love Harry Potter and have not heard of this movie or seen clips from the trailer this should pretty much summarize it. Newt Scamander,a magizoologist, joins forces with a young Albus Dumbledore to prevent Gellert Grindelwald from raising pure-blood wizards to rule over all beings who are unable to use magic. The movie is directed by David Yates and is the second movie of Fantastic Beasts and where to find them. By watching the trailer you can infer that Grindelwald has escaped the custody of MACUSA (Magical Congress of the United States of America) and is on the loose in Paris,France.

In the trailer Dumbledore tells Newt that he can not fight Grindelwald so it is up to Newt to stand up against them. So Newt will probably go to Paris, France with Tina Goldstein, Queenie Goldstein, and Jacob Kowalski (a No-Maj). In the trailer we see what looks to be the French Ministry of Magic in Paris so they will definitely encounter the French ministry at some point. We also see Newt’s brother Theseus Scamander with Leta LeStrange in the promo picture and they look to be very close.

In the promo picture we can also see the elder wand in his hand that he stole from Mykew Gregorovitch (the famous Bulgarian wand maker). Newt will get help from MACUSA along the way to fight Grindelwald. The story will take place in 1927, a few months after Newt’s first adventure. In a new photo released Credence (thought dead) can be seen with Claudia Kim’s unnamed character. Nicolas Flamel will also appear in the film, if you forgot him he is the creator of the Philosopher’s Stone.

This is J.K. Rowling’s second screen play and David Yates has returned to direct the film. We are all very excited for it and can’t wait until it comes out on the 16th of November 2018. “Potter heads” everywhere are so ready to see more of the wizarding world and awaiting all the upcoming magical events. This movie is the 2nd out of 5 films yet to come. What are your expectations for the magical new film?