A tragic event in the United states was the great fire of 1910. It resulted in a large number professional wildfire FireFighter fatalities, and the second greatest casualty was the  2013 Yarnell Hill Fire.The Fire started on Friday,June 28 in Yarnell, Arizona due to a Lightning Strike. The Fire lasted all the way through the rest of the month and some while ending on July 10.On 1910 dozens of  Firefighters died ,and 19 died from the Hill fire. While 19 Doesn’t sound like a lot one surviving member lived with guilt that he wasn’t there to be with his crew.

What started as a small wildfire by the cause ended up burning little over a 100 acres that same evening. By then a couple hundred firefighters showed up to the scene and one of them were the Granite Mountain HotShots. The GMHS were a group of highly-trained, Highly fit firefighters that took on and stopped many fires,but the one that ended the crew was the Yarnell Hill fire. Many families related to the Firefighters by the idea that they lost brother uncles, husbands, but there KIDS were most affected the kids would never grow up with their father’s to guide them through the harsh realities of the world.

The bodies of the 19 killed were never found. They died due to a fire breach in their shelter nicknamed the ‘Shake-and-Bake’ a shelter layered with aluminum, silica, and Fiberglass able to withstand up to 500 degrees but once that limit is reached the glue holding the material together melts off and the shelter is breached. The firefighters fighted to protect a town in the heart of the terrain that is greatly affected by fire. When they died they were about a mile away from the outskirts of Yarnell.

During the event of the fire 21-year old Brendan Mcdonough was on a ridge top overlooking the oncoming fire, it was standard procedure for each hotshot crew to have a look out and Mcdonough was selected. When he saw the fire greatly increasing that Mcdonough retreated to his trigger point , a spot where a hotshot member will retreat under geographic conditions. It wasn’t until Mcdonough reached his safety oint where he looked out and saw the area of the fire, everything was gone. At 4:47 P.M. a medic on a helicopter reporting to the area of Brendan’s crew had counted 19 shelters, and 19 bodies all reported deceased.

After the fire Mcdonough spent the next year visiting memorials, giving speeches, and raising money for wildland firefighting.In a interview by the Los Angeles time with the lone survivor Brendan talked about how others used the traumatic event to their advantage. “ It’s one thing to honor men. But there’s other people, a very few people, taking advantage of what it is , taking grief and trauma that’s not there own. They’ve attached themselves, Leeched on to my brother’s legacy.” To learn more about MCdonough’s life after the fire go to the Los Angeles Times website:  http://www.latimes.com/nation/la-na-ff-yarnell-survivor-snap-story.html 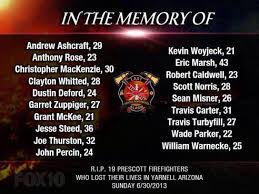 When I first ever heard about this which was recently I was sad to realize that so many firefighters had died without being recognized for what they risked, and giving their lives. We give a salute to all those that have died or suffered family loss. They are not recognized for their bravery and risk.