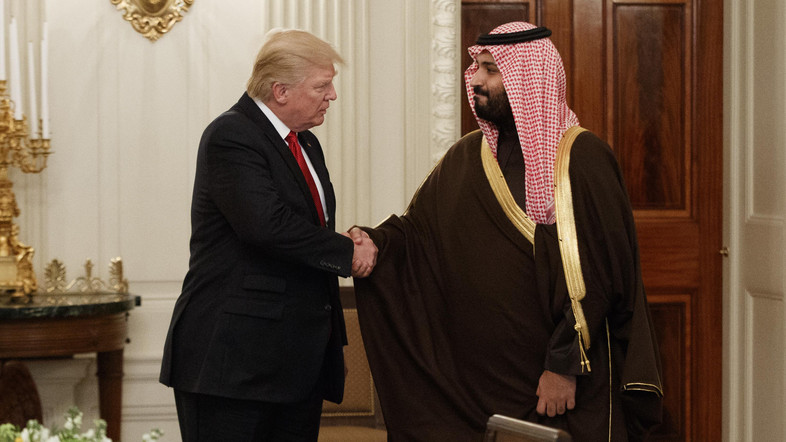 Last weekend Donald Trump met with Saudi Arabia’s crown prince, Mohammed Bin Salman, to talk over U.S-Saudi relations and the so called “turbulent” middle east. Trump met with the crown prince last tuesday and discussed the mounting problems with countries and people like Iraq, Iran, and extremists. They also discussed how they would take on the growing ISIS threat in Syria.

Donald Trump met with the crown price in the white house where they discussed the listed problems above.The president also talked with the prince about how the U.S was selling 12.5 billion dollars worth of military aircraft. The president also joked to the smiling prince that they were, “Paying peanuts,” for the aircraft.

The president also described how the U.S-Saudi relationship was, “Probably the strongest it’s ever been. “You are more than a crown prince now” Mr. Trump also said to Salman over lunch.

The president and the prince also talked about the growing problem of the Iran nuclear deal and if they should continue or “rip it up” as stated by the president. Trump also described the deal made in the Obama campaign as “the worst deal ever” but the president did not preview what he was going to do about with the deadline coming closer in May.

“The Iran deal is coming up and you will see what happen.” Mr. Trump told eager reporters. “Iran hasn’t been treating that part of the world, or the world appropriately he also stated.

The prince himself has been coined by senior Saudi officials as “a disruptive figure, and a radical figure.” The reason he has been called this is because of his support for social reform laws allowing women to drive, giving them a choice to wear a hijab, and a multitude of other rights for women.

Another version of the prince’s reform is allowing for more entertainment to happen in the kingdom like: dance performances, monster truck festivals, comic book festivals, and a wide range of other various forms of entertainment have all been allowed to take place in Saudi Arabia. The prince has also ended a 35 year cinema ban in the country and 300 theatres with 2,000 screens are expected to be open by 2030.

Some people want to embrace the reform that the prince is bringing to the middle-eastern country, while others are skeptical about it. Whatever you believe there is going to be no way to stop the social reforms in Saudi Arabia.