Personal View: False accusations are cruel and need to stop 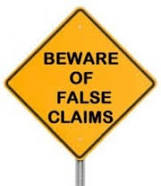 Most people have been wrongly accused of something in their life. Many students would get mad if one of their peers did something stupid and they got in trouble for it. Unfortunately, many people are wrongly accused of many things today. False allegations are too common in today’s world, and that is nowhere near a good thing. Here is a list of why false allegations need to stop.

Number 1: It can ruin someone’s life. Imagine this: You have a steady life. Good job, have a family, good house, etc. etc. Then one day, your co-worker accuses you of sexual assault, and all of that is completely gone. Your significant other leaves you over the allegations, taking with her your kids and the house, as well as your finances and belongings. You’re fired from your job and you have difficulty finding a new one because of the allegation. If you are convicted, you can be incarcerated. All of that happens in an instant. By just one action of slander your entire life is ruined. Unfortunately, this scenario is very common, especially with men. That is completely unacceptable.

Number 2: The Boy Who Cried Wolf. Now you may be wondering: “What does some fairy tail have to do with false accusations?” Well in the story, a shepherd boy repeatedly tricks nearby villagers into thinking wolves are attacking his flock. When a wolf eventually does attack his flock, he tries to get help but the villagers think it is another prank. His sheep are eaten and (in some cases) the boy is eaten as well. This is a similar to false accusations. If we keep spreading false allegations in the news, we’re keeping our attention away from the real ones. It also makes it harder to believe the people who are actual victims, since our automatic response will be: “oh, all these others are fake, why should I believe this one?”

Now that you know about these dangers, what is a way we can help get rid of these? First, we should stop automatically believing people who make accusations. It is commonplace that people will exploit the emotions of people who do this to help bring down famous people, (especially politicians) they disagree with. We should also punish people who make false accusations to discourage people from doing them, and to teach a lesson to the bastards who would do such a thing. Now, whenever you see an accusation, please stop and think: “Is this true or not?”