Grab your popcorn! Movies that have been our childhood favorites are having sequels and fans are going wild about it! Trailers and teasers are just making us more tempted to watch them. They are heard to be released this summer or next year. People of all ages are already planning to see them with friends and family! 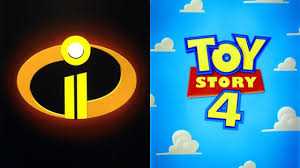 One of the most talked about sequels is Incredibles 2. This sequel to Incredibles will be expected to come out June 15, 2018. According to Pixar, we are expected to see the characters reunite after “a new villain hatches a brilliant and dangerous plot”.

Pixar also lets us know that the Incredibles, along with Frozone will have some troubles working together to fight this dangerous villain. The villain in this movie is not the only struggle the Incredibles will be facing. Another big struggle mentioned on the Pixar website is Jack-Jacks emerging powers that the family has yet to know about.

Another upcoming sequel that should be coming out in summer of 2019 is one that made us believe our toys came alive when we were gone. Screenplay Pixar has officially confirmed on their website that there will definitely be a Toy Story 4 that will be released next year.

So far, Pixar has decided that the voice of Woody and Buzz will still be Tom Hanks and Tim allen. Keeping these actors from the first Toy Story will remind everyone of their favorite childhood movie. Director Josh Cooney has said that in Toy Story 4 Woody reunites with Bo peep, which is Woody’s former girlfriend.

All in all, everyone can’t wait for their favorite childhood movies to come out with sequels. Although the originals might remain their favorites, the sequels will still be watched by plenty and continued to be talked about.