What we know about the Austin package bombings 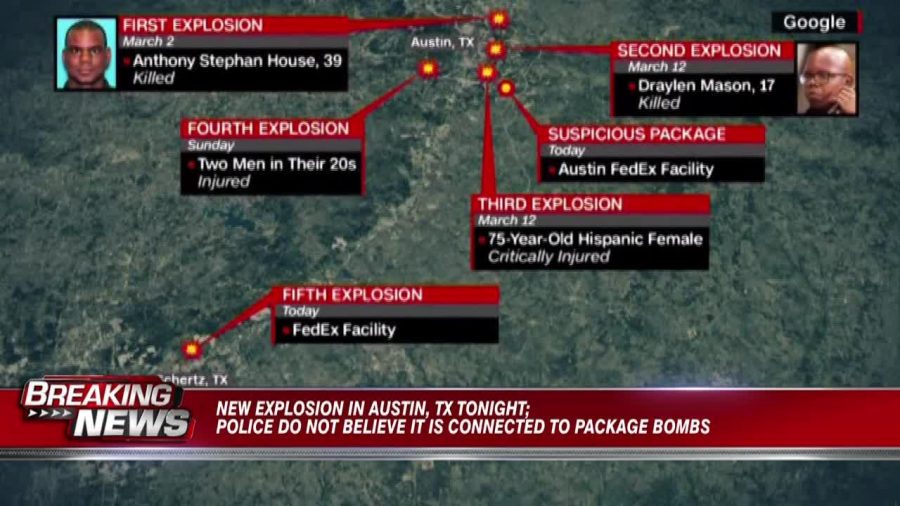 People in Austin have been living in terror for almost a month. Explosives in boxes have been being placed all over the city for the past two weeks and it has finally come to an end. So, who was behind all of this, and how can we prevent this from happening?

The serial bombers name was finally released on March 21. His name was Mark Anthony Conditt, and he died  in his car at around 2:00 am. Officials say that he blew himself up with one of his homemade bombs. Since he did not survive police went to friends and family for answers to why he did all of this. They went to his house, and inspected it, putting his two other roommates in custody.

As of now only one has been released. Police have been gaining more information daily. Austin is now safe from Conditts bombings. The rest of the bombs have been found and put in isolation..

The officials found Conditt by using FedEx surveillance , Conditt parked his red Ford SUV to where surveillance cameras could read his plates. Police started using his plates to track him. Eventually Conditt turned on his cell phone allowing officials to monitor his location and find him.

As of now, two people have died, and six have been critically injured. The first box exploded on March 2nd, killing 39 year old, Anthony Stephen. It was said to believe that his 8 year old daughter was getting ready for school, when Stephen was opening the deadly package,. Anthony grabbed the package and it exploded. On March 12th, a second bomb went off, killing 17 year old musician, Draylen Mason; also injuring his mother as well. Draylen was just getting ready to start college to become a professional musician. Another bomb also went off on March 12 injuring 75 year old, Esperanza Zahenra.

On March 18, the fourth bomb went off, seriously injuring two 20 year old men. Their names have not been publicly released. Instead of dropping the packages off at peoples houses, Conditt used tripwire. He put it on a sidewalk, and when someone went over it, the bomb would explode. After the tripwire incident, the second to last bomb went off at the FedEx in Schertz, Texas, injuring an employee. The final bomb went off on March 21, killing Conditt himself.

How to protect yourself around explosive packages. If you are suspicious don’t touch the item. You also want to isolate the package as soon as possible. Make sure you don’t open or smell the package, and lastly, notify an official.