Get to know Dobie Cheerleaders 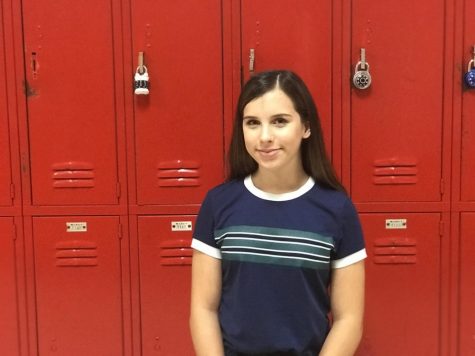 The Dobie cheer team works hard, and works harder with 20 cheerleaders that have to try out the year before cheer season. They must attend football and basketball games as assigned with their coach, Mrs. Santos. The cheer team has a fee of $900 for cheer shoes, uniforms, pom poms, Dobie cheer shorts, spirit shirts, backpacks, and other team spirit needs.

Pieper Jones, 8th grader, cheered for Dobie last year. She is performing the base position. During this summer Jones attended an all day cheer camp at Dobie, where they worked on tumbling and practiced cheers, for football and basketball games during the 2018-2019  season.

I asked Pieper how cheer effects she explained that,”It’s something different, and people think it’s easy. I was very quiet before, but cheer made me gain my confidence,” said Jones.

Jones said her favorite part of cheer is the cheers, and “experiencing what it is to help cheerleaders who haven’t cheered before,” she said.

Amara Mccollum, Amara has been cheering at Dobie for 2 years. We asked her how she feels about cheer this year. “I get very excited to go out with the girls, and tumble and call some of the cheers,” said Mccollumn. “Cheer is fun when the crowd looks at you.” During the summer, Amara also attended a summer day camp for cheer.

While she was at the summer camp she learned new stunts, and a new dance that they are working on. “I like being on the cheer team because I like being a part of a team, and making new friends, and going to the football games and cheering’’ Mccollumn’s favorite part about cheer is the football games, and the banquet.

The banquet is where everyone on the team gets all dressed up and goes out to eat as a team. Amara also says that the workouts are fun because the cheer coach makes it fun; for example during Halloween they would  pick out a pumpkin and they would all have to do that work out, “Like trick or treating” Amara says. 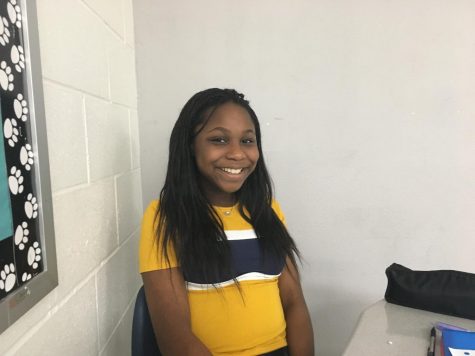 Dobie cheer has a lot to do with school spirit, and giving your most effort to support your team. Cheer might be lots of work and determination to get your cheers and stunts right, or being ready to perform in front of a crowd. During the summer it’s important to come to cheer camp because if you want to cheer well for our school and show school spirit which is most important during this time they learned more stunts, cheers and improving their tumbling skills.

To be selected for the cheer team, tryouts are held in the the year before the season starts, where you will show off your moves and skills. The Dobie cheer team says that cheer is fun to be with girls and to be part of a team. They say that everyone thinks that cheer is easy but they say otherwise. Cheer leading is not all work; yes you work but it can also be fun. Cheer is a hard working motivating sport, they cheer on our team even if we are losing or not doing our best, they are always motivating in anyway possible.