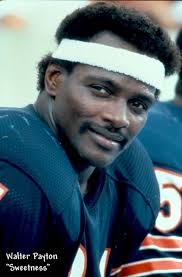 Walter Payton was born on July 25, 1954, and was one of the greatest names in football. Walter Payton went to Jackson State University where he was an all american in football and where his football career would begin.               Walters career began when he was drafted to the Chicago Bears in the 1975 draft in the in the first round as the fourth pick. Walter Payton would later on go to play 13 seasons in the NFL, and would go to win Super Bowl XX, the NFL most valued player, and would get nominated for the Pro Bowl 9 times.

Hall of Fame NFL coach and player Mike Ditka described Walter Payton as the best player he had ever seen- but even greater as a human being. He was know as “Sweetness”, he is know as one of the most prolific running backs in the NFL. After struggling with the rare liver disease primary sclerosing cholangitis for several months, Payton died on November 1,1999,aged 45 from cholangiocarcinoma. His legacy  includes the Walter Payton Award, the Walter Payton Man of the Year Award, and a heightened awareness of the need for organ donations.