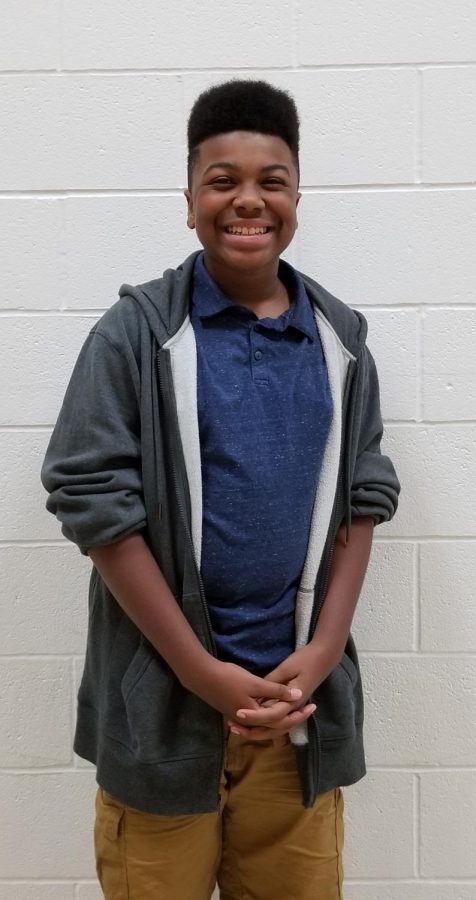 Marquise loves his life. Marquise Hamilton is an 8th grader at Dobie. He has one younger brother named Dakari and an older brother named Jaden. Both of his parents were in the Air Force (hence the move from Virginia to Texas).

Marquise is a middle child and he definitely does NOT enjoy it. “It’s way more difficult than people think it is,” Hamilton said. He feels that they get more attention. “It sounds bad, but I get forgotten a lot,” he continued. He feels that one week he gets no attention and then the next week he is the center of it all. “But I mean, that’s my family, and I’ll love them no matter what.”

His family originally planned to move to Germany because his parents were stationed there. Yet, all these plans went down the drain because the move was cancelled. The Air Force no longer needed the Hamiltons in Germany. “I feel like I missed out on a lot. It would have been my first time out of the country,” Hamilton said. “But if the move wasn’t cancelled, I wouldn’t have the friends I have today.” He was very sad that he wasn’t going at the time though, because his parents met in Germany, and he wanted to see what it was like.

Hamilton came to Texas in 2014, halfway through third grade. It was Valentine’s Day when he arrived. He didn’t know this but the entire class had known that he was coming, so they made a Valentine’s box for him! “I was very nervous, but I eventually got used to the class over time,” Hamilton stated.

Hamilton made friends quickly, and learned to adjust. “It’s pretty much an ‘I know everyone, everyone knows me’ situation. I wouldn’t consider myself popular, though,” he said. “‘Popular‘ has a bad connotation.” Although he is on a first name basis with most students at Dobie, he doesn’t talk to the majority of them on the regular. He has a close group of 4-5 people that are very important to him.

Hamilton is a good student in school although he can sometimes struggle with grades. He is involved in many extra curricular activities, which are all music related: band (he plays the saxophone), and the upcoming musical at Dobie (the True Story of the Three Little Pigs). He also plans to audition for the UIL musical here at Dobie. “I’m a very musical person,” Marquise said. “Without music I’d be so bored,” He feels that his parents influenced him in this area, because his father was in choir and his mother was in band.

Entertainment plays a big role in Marquise’s life. He enjoys watching TV, and it takes up a lot of his time. He watches Netflix and Hulu both. He enjoys Grey’s Anatomy, Gotham, Young and Hungry, Riverdale, The Gifted, Superstore, Steven Universe, Cloak and Dagger, Runaways, Stranger Things, and more!. “I watch a little bit of everything,” he concluded.

“Overall, I love my life. It’s because of the people in my life that help me appreciate what I have,” said Hamilton.