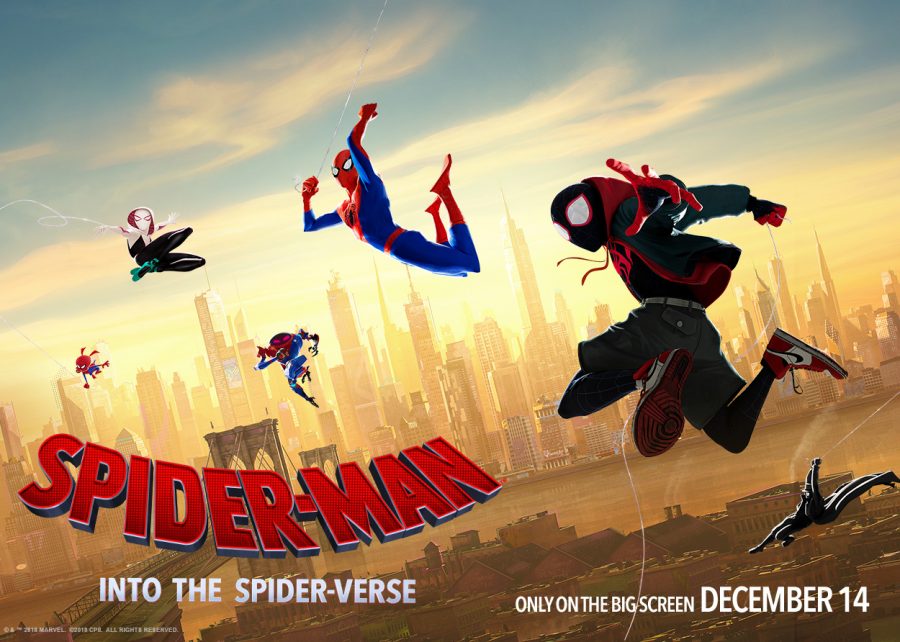 Spider-Man has always been a favorite super hero among many, so it isn’t much of a surprise that Sony Animations and Marvel Studios new animated film, Spider-Man: Into the Spiderverse, was a hit! It came out on December 14, 2018, and has since gotten much applause.

Everything, and I mean everything, about this movie is awesome! The story-line, the plot, the characters, the character development, the humor, the drama, the pop-culture references, and even just the colorful, unique and creative style of the animation makes this one of the most successful Spider-Man spin-offs so far.

In addition to great visuals, Into The Spider-Verse, also has a great soundtrack. A soundtrack album featuring songs made for the film, titled Spider-Man: Into the Spider-Verse (Soundtrack from & Inspired by the Motion Picture), by various artists including Post Malone, Swae Lee, Nicki Minaj, Anuel AA, Juice Wrld, Lil Wayne, Ty Dolla $ign, and XXXTentacion, was made for use in this film.

The movie is a first of its kind, as Marvel has rarely done a full-blown PG-rated and animated motion picture. However, just because the movie was produced by Marvel Studios, doesn’t mean that it belongs to the Marvel Cinematic Universe or MCU, which is Marvel’s ever-expanding chain of movies that all form part of the same ‘big picture’ or universe. Although it may seem this way, the film is also not a remake.

To make it basic, Spider-Man: Into The Spider-Verse is a story that revolves around Miles Morales, an average teenager who lives in NYC. When he is bitten by a radioactive spider, he becomes the one and only Spider-Man, or so he thinks until he meets other ‘spider-people’ brought to his dimension by a villain named Kingpen. The movie then goes on to detail the events that take place as Miles and the rest of the ‘spidie gang’ attempt to bring Kingpen to a stop before he puts his diabolical plan into action, all while being surrounded by stunning visuals and some particularly hilarious moments, along with some very heart-warming ones.

The film has gained a 97% on Rotten Tomatoes, an 8.7/10 on IMDb and an 87% on Metacritic. It has also won the Golden Globe Award for Best Animated Feature Film, a Critics’ Choice Award, a New York Film Critics Circle Award, and the PGA Producer of the Year Award in Animated Theatrical Motion Pictures. Apart from this, “Into The Spider-Verse” also landed at No. 1 at the US box office, nabbing an almost $40 million, fueled by largely positive reviews.

I’m not the only person who thinks this movie is lit either. When asked his thoughts on Into The Spider-Verse, Christian Grant, 8th, said “It was amazing,” and quickly added that there was nothing he disliked about the movie. David Hart, also in 8th, says that he really enjoyed the style of animation, and thought the comic book design was really cool. Another student, Kacie Aldrich, 7th praised the movie for it’s awesome visuals as well. She also added that she loved the music, too.

Many critics also praise this movie, for example, Emily Yoshida, a critic for Vulture says “[the film is] A bit of a conceptual dare, but it wins with its nano-second sharp timing, and percussive rat-a-tat-tatting of panels and split screens that make the action and visual gags feel jumpy and alive.”, while John Nugent, a critic for Empire, says that Into The Spider-Verse is “Fresh, funny and frequently bonkers… [it] is an astonishing shot of cinematic superhero adrenaline. For such an over-familiar character, somehow, this feels original and entirely new”

If you are considering going out to watch a movie sometime soon, you should definitely give this film a shot. You will most likely not be disappointed. As I said before, everything about this movie is awesome, and if you’re on the hunt for a good new superhero movie to watch, this is a great option.