A team is undefeated, B team has won four games, C team won one game. 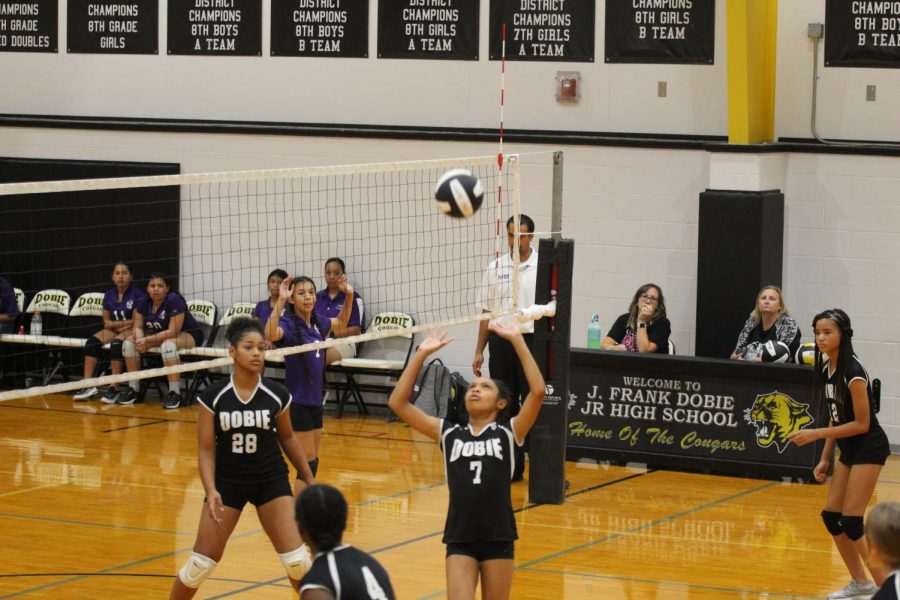 Ninety girls flocked to the breezeway after three early mornings of tryouts at 6:15 a.m to 7:45 a.m. The results of the tryouts were posted and 30 girls saw that they made the team. Those girls were split into the three volleyball teams. They have had up to six games so far.

Now, halfway through the season there are mixed emotions running through our athlete’s heads. With travel games and eligibility, some of the girls’ stress levels are high, while others are confident. Find out how they all feel and what’s going on halfway through a winning season.

Some students say the season has been like an emotional roller coaster.

Disaya Vinthaxay is a 7th grader on the B-Team. “There’s a lot of twists and turns. Sometimes we win and sometimes we lose. Emotions can get crazy,” said Vinthaxay.

Emerson Bradfield is on the A-Team. “A-Team is undefeated, so far so I am happy about that and I love my teammates,”  said Bradfield.

Eligibility is a very important part for any sport. The  Dobie athletics website’s volleyball page states. “If a student has an average below 70, they become ineligible. Those failing at the end of six weeks and every nine weeks, thereafter become ineligible and will not be able to play in games.”

Some athletes are currently ineligible, which worries some coaches.

Coach Pickins is the 7th grade B-Team coach. “I’m worried because girls only seem to care when eligibility starts to come up,” said Coach Pickens.

Others, however, are not concerned.

Coach Dierschke, is the 7th grade A-Team coach. “No, I’m not worried, because we tend to stay on top of our athletes and check their grades weekly to make sure they’re getting work done and turned in,” said Coach Dierschke.

Some think the rule is helpful.

Airielle Bulgin is a 7th grader on the B-Team. “I am not worried. I think it is amazing because it gives you something to work for and watch your grades,” said Bulgin.

Alessandra Ramos is a 7th grader on the C-Team. “I feel motivated because my team is always there to push me and keep trying,” said Ramos.

Games can be stressful, with traveling with the hope to win, coaches and girls get tense. The official Rank One Schedules website states, “The first game of the season was August 29, 2019 against Kitty Hawk and Woodlake here at the Dobie campus in the old gym. A-team won against Woodlake and lost to Kitty Hawk. The last game of the season is October 17, 2019 against Corbett at the Dobie campus.”

Coach Pickens is the 7th grade volleyball B-Team Coach she said  “No, because all we’re doing is putting all of our hard work into action,” said Coach Pickins.

Some girls don’t worry at all.

Bella Malone is a 7th grader on the C-Team. “No they aren’t for me. It may be for some people. I guess it’s because I’m confident in my team, my coach, and myself,” said Malone.

Others stress greatly about messing it up.

Airielle Bulgin is a 7th grader on the B-Team. “Yes because I worry about messing up serves and stuff. I really want to win and I don’t want to lose points or it to be on me if we lose,” said Bulgin.

The volleyball girls travel every other game, so they are always together. The young athletes are making lots of friends.

Alessandra Ramos is a 7th grader on C-Team. “I’m very motivated because my team is always there to push me and keep trying,” said Ramos.

However for some, the teamwork portion needs some work.

A’liyah Fulton is a 7th grader on the C-Team. “I feel really good but our team is starting to lack on some things and some of our teammates are starting to think they’re better than the others so that hurts our teamwork. We just need to remember that all of us are equal and to take responsibility for things,” said Fulton.

The best part is making relationships with your teammates.

Cara Williams is a 7th grader on the C-Team. “I love my teammates for what they do and love. We have a lot of fun,” said Williams.

Bella Hager, is a 7th grader on the A-Team. “It’s going good, we’re undefeated so far and we all play well together,” said Hager

All in all, the girls are having so much fun learning about how to improve and making so many new friends.

Micheala Wray is a 7th grader on the A-Team. “I think [the season]  will end amazing, because everyone will get better and will have a lot of new Techniques,” said Wray.

This season may be halfway over but it will never be forgotten.