Personal view: being on Dobie’s Cross Country team can be challenging, fun

picture at the district meet

My name is Jaci Anderson and I am a member of the cross country team. I am a seventh grader and this is my first time doing cross country. At first, cross country was challenging but over time, it got better. It’s a lot of fun!

Cross country is a sport where you run miles for time. Not every Dobie students gets to compete at the cross country meets. Being selected to compete can be very competitive. It’s all about your times on two miles for the girls. For boys, it’s three miles.

I have made it to compete to all meets so far and I hope to make it to the district meet. I am pretty sure I will make it!

We usually don’t run on the track, but that is also what makes this sport really enjoyable. We run on nature trails and that means that we have a nice scenery to look at.

Dobie’s cross country team is made up of girls and boys in seventh and eighth grade. This year, there are about 50 members of the team. There are five meets this season.

Activities During the Week

If you’re in cross country at Dobie, you would have to practice in the morning around 6:15am, due to how heated it is in the afternoon. We mostly do different workouts based on the days of the week, and the names that the coaches came up with for our days of activities are funny in a way, because they are honest.

“Miserable Monday” is when you run for a certain about of time, sometimes 25-30 minutes of just continuous jogging.

“Torture Tuesday” is really “fun.” Yes, I am being sarcastic. This is the day when we would do our sprints. Which is running at about 90% for, let’s just say, a 600 meter timed jog. Most of the time we would start out with one timed mile. If we don’t do that we would most likely do an off-campus run. Which is where we run two miles through neighborhoods on sidewalks, timed as well.

Wretched Wednesday is interesting…the main thing that we do is the Native Run. The Native Run is where you have a group from four to seven, and the last person has to sprint to the front of the line while the whole line is jogging itself. Most likely just anything that has to do with running.

Throw-up Thursday is the official day when we do our off-campus runs. The sucky thing in this run, is th

at you have to run two laps around the track before you can even start your journey through the neighborhoods.

Finally, then there’s Friday. Most of the time we just won’t have practice at all, but there are some days that we do. The practice usually starts later in the morning around 6:45-6:50am. We would do a light workout to “rest” for the meets on Saturdays, also get our uniforms for the meet.

My first practice and track meet

The first time I went to practice was a fit stressful, because I was out of shape from the summer. It was Monday, so the team had to jog continuously.

Oh my, when I finished that practice I looked like I was beat up! Or maybe it looked like I was sunburned, as well as over heated. Under my eyes were terribly red, and I looked really weak. Seriously, when I walked into the cafeteria my friend, Keylani, even asked me “Are you ok?” The only thing worse than looking extremely exhausted was changing into the sticky, tight skinny jeans on to my sweaty, worn out legs.

As the weeks went on I became better-a lot better. I improved my stamina and was making all the meets we had so far. I tried finding people that I could pace well with, so I can stay the same speed, and not speed up or slow down- not even knowing I’m doing it.

That’s when I found Chloe, who is now my pacing buddy, I got some information from her as well. She is in 8th grade here at Dobie.

Running can be very helpful if you’re out of shape and want to join other sports without tiring quickly. Chloe Mashburn joined this sport because she said she wanted to improve her fitness.  “I was out of shape, and I was wondering if it would help me,” she said. 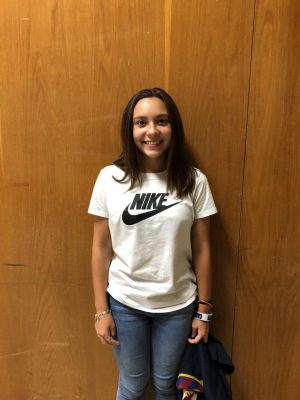 Mashburn thinks that both boys and girls should run two miles, instead of males running three. Many of the schools we compete against are pretty competitive when at the meet. “The meets depend on how other schools do compared to me,” she said.

My first track meet was at The Verizon Amphitheater/ Retama Park, it was called the Feast Meet.

The meets are fun, but they can be SUPER intense. Starting the race is a bit stressful, this is when most of my anxiety comes out. All of the schools competing line up in these boxes that are drawn on the grass.

When getting ready to start, the person holds up a smoke gun, and fires it in the air when it’s time to go. Most of the time there is a golf cart or some sort of person driving through the course to lead the runners.

My father’s friend, who is a head high school track coach, told me to be aggressive and push through people to get up to the front and he was right- because you want to get as less points as you can for your team.

That’s the life of a cross country runner at Dobie Junior High. It’s really fun, and if your a runner and enjoy running, I think you should try it out.

According to Google, cross country was an English game called “hare and hounds” or “the paper chase”. People started competing in these long races in 1837. Then, was soon established a national championship on December 7, 1867. This is a sport where everyone starts out small and builds up to race the distance.

According to Top Ten Interesting facts About Cross Country Running, cross country typically only goes on from five to ten kilometers. Bones can also benefit from ritual running. The University of Michigan found that those who ran 15-20 minutes a week had higher bone mineral density than those who didn’t.

As reported by Cross-country race Facts for Kids, this sport is scored by whoever finishes first gets one point, second person- two points, and so on.

Coach Head coaches cross country and she does a lot for her runners.“[Cross Country] builds work ethics and teaches athletes to work as a team,” she said.

Running a mile should take from seven to eight minutes when doing the workouts at Dobiel. Coach Head chose to coach cross country, due to the fact that she’s a runner herself. Also because she loves the kids who come out to practice. “Cross country athletes are having a great season, and I’m really proud of them,” she said.

Coach thinks that cross country may inspire kids to run outside of practice for improvement. “Running is a lifelong skill that should be practiced by many,” Coach Head said.