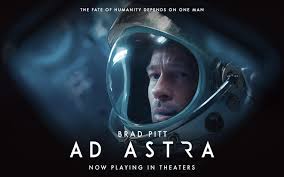 In the 2019 adventure movie Ad Astra, Roy McBride works for the Space Command, when he is called to a meeting with the officials of Space Command. That’s when he learns his father, Clifford McBride, is maybe still alive orbiting Neptune.

He then has to travel to the moon, where he gets on a rocket to Mars, but then is ordered to got back to Earth because he got too emotional. He then hijacks a rocket going to Neptune where he has to blow up a reactor that causes electrical surges, or ‘The Surge’ that endangers Earth.

“Existential but also intimate, Ad Astra is stunning, sensitive exploration of space left by an absent parent and the infinite void of actual space,” said John Nugent, from Empire.

For me, this movie is between being decent and being hated. It progressed slowly, and there wasn’t that much action. It did an okay job of being an emotional movie, but honestly, I almost fell asleep halfway through it. Zzzzzzz.  However, I think that the actors did an excellent job.

Since the movie is still new, I could only interview people about the movie trailer. One Dobie student I interviewed is John Simons, an 8th grader. He did not plan on seeing, calling it “ your basic space movie.” Said Simons, “I would probably fall asleep watching it,” and “Like any space movie.”

Another Dobie student, Greysen Alfred, an 8th grader, didn’t plan on seeing it. Although he thought the actors did a good job in the trailer. “It was ok,” and “Another space movie,” Alfred said.