The anime you should watch: My Hero Academia 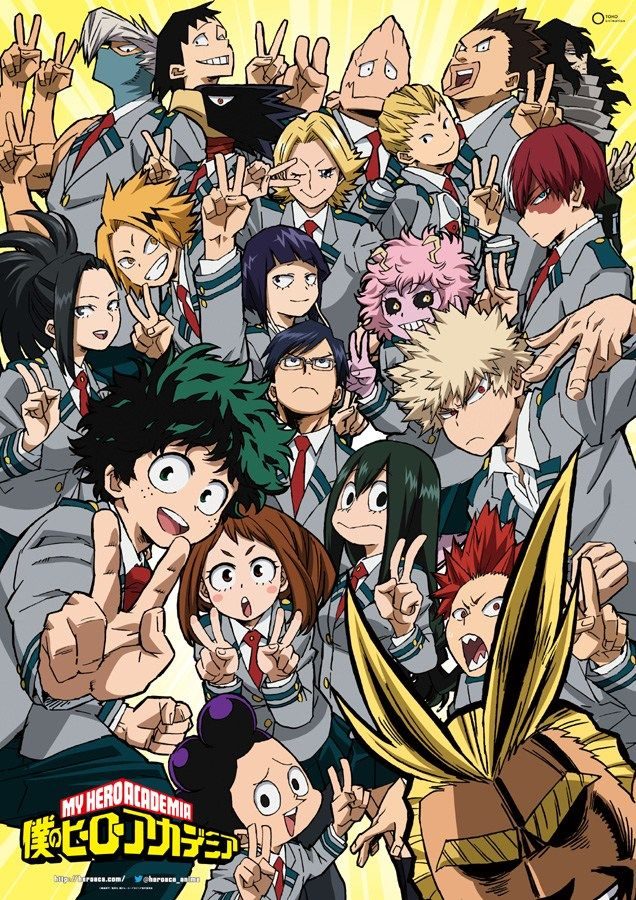 My Hero Academia, a manga that was created by Kohei Horikoshi, and later animated by Studio Bones. It was spread worldwide in 2015 by Weekly Shounen Jump.

On April 3, 2016 was when the first season was released for My Hero Academia, as it’s other name, Boku No Hero Academia. For those of you who don’t want to pay for the seasons, can go on an app called, “Crunchyroll”.

Crunchyroll is a streaming app that lets you watch anime, manga, or drama. For My Hero Academia, updated episodes occur every Saturday. If you just want to read it, then you can find My Hero Academia Origin Stories or just the original graphic novels in school/public libraries or you can search up readheroacademia, though it will not work for school devices.

For those who are waiting and yearning for season 4, and want to be informed on when it’ll come will be on October 12, 2019

The majority of Dobie Junior High have been reading the manga and highly enjoy it. Even some teachers are beginning to watch it. Mr.Viera, is an 8th grade science teacher who has began the series and is looking forward to seeing more of it,”I just recently started watching My Hero Academia,” he said. “I know I like it, just don’t know it yet.”

My Hero Academia is based on a school for people to become a hero themselves, Izuku Midoriya, also known as “Deku”, is the main character of the series, and was a boy who wasn’t born with the power known as a ”Quirk”.

Eventually Izuku Midoriya met his one and only idol, the number one hero in the world, All Might, when he was attacked by a villian. At first, All Might felt like he had nothing to do with Izuku, soon after, the villain that had attacked Deku, went free and took hold of Katsuki Bakugou, his former friend.

Izuku soon proves that he could still be a hero without a quirk when the former heroes couldn’t. Though, Izuku did eventually get scolded in the end while they were all over Bakugou. But, All Might praised him for his bravery, and decided to pass down his quirk to Deku, the quirk known as ”One For All”. That’s when his journey to becoming the Number One Hero begins.

For most viewers, the most treasured character from My Hero Academia is Todoroki Shouto, the most emotional, yet private and respectful character. Todoroki Shouto wasn’t noticed in the background of season one, but some people do recognize his half and half hair color.

Seth Matthews, an 8th grade student at Dobie said he watches the series. “Todoroki, because he’s beautiful. I had this thought the other day he could go with any emo song in an AMV,” he said.

There are also other characters who have a reputation, some good, some bad. The least favorite character is Mineta Minoru, a disturbing, unpleasant student of Yuuei (U.A.) High School.

Kyleigh Hiseley, an 8th grade student at Dobie, would always had some sort of the merchandise on her at Dobie, “My least favorite… it’s pretty obvious, Mineta. I’d say Deku’s okay, he’s a little emotional, and I don’t like it when he cries over everything, basically Deku isn’t my favorite character, but he isn’t my least favorite.” she replied.