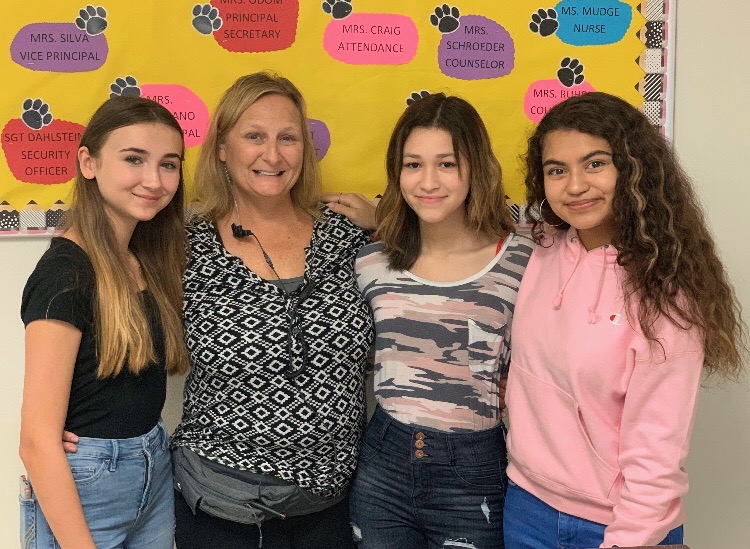 School shootings have become a part of American society and are now more common. There has been a rapid rise in the number of school shootings in the U.S. since the Sandy Hook Elementary School shooting. Students on our Dobie campus feel they’re safe, but they always have something  nagging in their brain, telling them that it could happen at any moment.

Amaiaya Myrick, an eighth grade student at Dobie Jr. High said a lack of mental health support could be to blame for school shootings. “A lot of kids’ mental health is bad especially in jr. high and high school,” she said. “Many kids aren’t comfortable talking to counselors they don’t know very well…I feel safe at Dobie and can’t imagine a school shooting.”

On October 1 at Dobie,  there was a lockdown drill. After the drill, Mr. Jackson Vice principal at Dobie Jr. High, posted a message on Facebook for parents: “Today we performed a lock down drill to test our readiness and safety protocols on our campus. We will continue to perform various drills to ensure student safety remains a top priority.”

Mrs. Craig, attendance clerk at Dobie, said that school safety is important. “School safety is made a top priority thanks to our administration,” she said. “There will always be someone in the office and our doors are secured.”

Lilliane Johnson, an eighth grader at Dobie Junior High, says she feels safe in school. “But at the same time I will never be prepared for anything like a school shooting and it scares me to know we need to be prepared,” she said.

Johnson has the same fear most students have these days. “The school as a whole is prepared, but I am not as prepared for something as scary and serious as that,” said Johnson.

Sargent Ram Hernadez, a school resource officer, at Dobie Jr. High, said overall, “There is no way to avoid school shootings, but we can be vigilant and look out for each other.”

Many school shooters have mental health problems, which is one of the many contributing factors as to what triggers them to act out the way they do. “It’s not the gun that’s the problem, but the person handling it who has something mentally wrong,” said Hernandez.

Many websites such as Children’s Hospital of Philadelphia Research Institute provide helpful information and tips.  “It starts with building a healthy school climate” and “ … “A cohesive and supportive school environment is key to preventing school shootings…”

Personal view: My experience with ALICE DRILLS in Ohio

Hello my name is Bailey Rueda. I am an eighth grader at Dobie Junior High. I moved here from Ohio last year. In Ohio, we had A.L.I.C.E drills to prepare for school shootings. We would practice a different letter each month. Before we had the drills, I felt scared of a shooting happening and I felt the school wasn’t prepared.

The A stands for Alert, we didn’t need to practice that one we were just told to call 911 if we had our phones. The secretary also had a button behind her desk that would alert the police of an emergency at our school.

The L stands for lockdown. We would do a lockdown, but it was not just hiding it was moving things in front of the door to make it harder for a potential threat to get in.

The I is inform but we didn’t have to practice that one.

The C is counter, we would find objects that we could throw at a threat. Hard objects to hurt them or catch them off guard.

The E is evacuate. We would do an evacuation like we do here in Texas for fire drills.

The A.L.I.C.E drills helped me feel more secure knowing we had a plan. I also felt like the school as a whole was more prepared. The school had a plan and that helped me focus on my work instead of a possible school shooting. The drills also prepared me for possible future threats.