Meme culture is a big deal 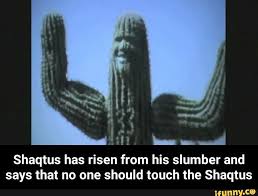 Shaqtus is a popular and funny meme from the Internet.

Memes are everywhere. Sometimes the mere mention of a phrase can make a room full of young people crack up and it’s all because they saw it on a meme. This happens all of the time at Dobie.

“Memes help me smile and make me laugh a lot. Everybody should watch memes because they make you feel good, even if you don’t feel good at the moment’” said Javon Toliver an 8th grader at Dobie.

Memes are images with words that are often funny and sometimes even go viral. Meme Culture is the study of an art of entertainment in which can vary in many different styles, according to the Merriam Webster online dictionary.

Meme Culture has evolved from 2007, where instead of a picture, plus some words, memes are more diverse creating more things to laughat. Even Dobie students are familiar with meme culture “I like memes that don’t make sense at all,” said Mateo Galvan a 7th grader at Dobie. Michael Durfee a 7th grader at Dobie has an opinion, “If the meme is ridiculous, the meme is good.”

Memes are very diverse. Many people like all parts of memes while others like certain parts. This shows that meme culture is its own community. Memes can come from different areas of social media, one of the most popular is Reddit.

Teachers at Dobie have a good grasp of what meme culture is, “My impression of memes is an online joke book, where people trade jokes,” said Ms Jordiin.

Meme culture is also popular with Dobie students “It is a respectable culture because it helps spread jokes and humor. It also helps people with understandings and conversation,” said Michael Durfee.

Meme organization. You may see a variety of memes, these can be listed in groups. The first group (the first popular meme) is the kind of meme with some image, and white bold text on the top and bottom of the meme.

The second group has more irony, it explains an everyday situation and makes a turn. Celebrities are  often very reliant on this kind of meme.

The third group of memes consists of distorted text and images. These kinds of memes are one of the most modern memes, memes that reflect off of old memes, these give an opportunity to laugh about the history af memes.

What is meme culture?