Ferrets are third most popular pet 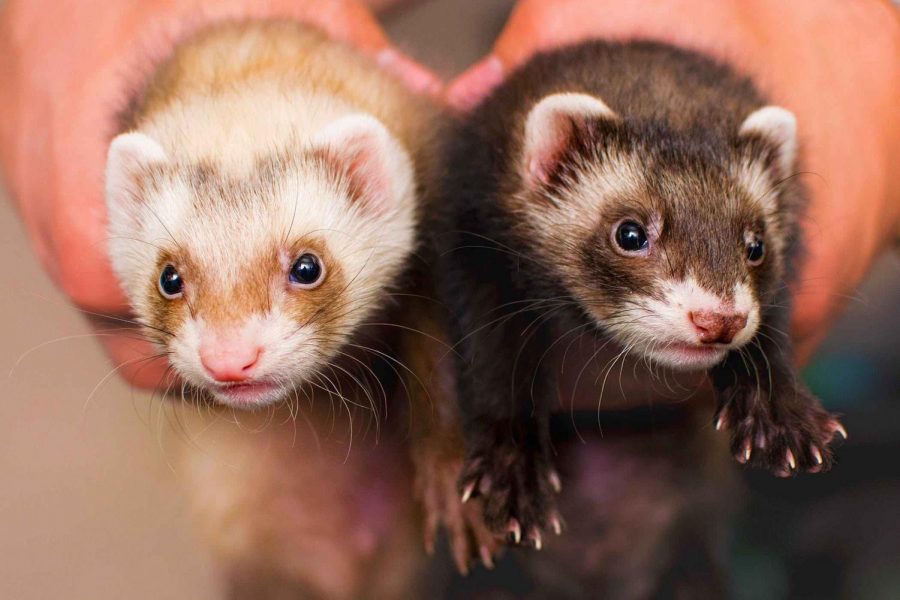 Ferrets, the third most popular pet, the small weasel like adorable critters and the animals that are very energetic. Not many know much about them. Ferrets are sometimes called cat snakes, cat noodles, slinkies and bandits.

They are mischievous. They like taking items and hiding them. They of course mean no harm in it and can be trained to not do that. They can also be potty trained and get biting training and more.

Seventh grader Lindsey Boyd agreed “No, because when I see them in the pet store, I see poop around the cage.”

The company Marshall’s raises animals claiming that they treat them as their own, but PETA worker was sent undercover and shared her experiences that showed something very different.

The ferrets were left in small crowded cages, deprived of food, water, and were neglected.

When ferrets of any age got injured, the staff would leave them to die. Hundreds of newborn and young ferrets fell through the gaps in the wire cage bottoms 3 feet to the waste-covered concrete floors below, where they were left to writhe and cry, and they often died of dehydration or starvation”  the PETA investigator shares that when she requested to give them better care and wound treatment, she was told to “just leave” ferrets as they were. “Triple F forbade its workers—including PETA’s investigator—to pick up the dying ferrets” The PETA report said. Marshalls has paid a fine of $28,000 for violating 38 of federal labor when the investigation revealed the truth.

Marshall also sells products for ferrets that aren’t even good for the ferrets, their food products barley give any protein, which is vital for their diet. Ferrets are also prone to have health problems since they are inbred to get qualities customers want. Marshalls ferrets get two dotted tattoos branded on their ear.

Ferrets are being rehomed due to impulse decisions. It is advised to research a lot before getting a pet.  “Approximately 6.5 million companion animals enter U.S. animal shelters nationwide every year”according to www.aspca.org.

The ferrets scientific name is Mustela putorius furo, domesticated from the european polecat.“The history of the ferret’s domestication is uncertain, like that of most other domestic animals, but it is likely that they have been domesticated for at least 2,500 years. They are still used for hunting rabbits in some parts of the world, but increasingly they are kept only as pets.” according to ferrets.askdefine.com.

Ferret’s spines are also flexible, meaning they can get into any spot their nose can fit through. “Ferrets are like slinkies” Petit said. Ferrets are often argued over, if they make good pets or not. “I don’t know, I think my dog would eat it” boyd said when asked if she considered owning a ferret.

Ferrets also have a war dance they do when excited, They used to do it to their prey to put them in a daze, now they do it for fun! Their lifespan goes from 5-10 years, maybe even longer depending on their health. Their daily sleep also goes from 14-18 hours each day and they adjust their schedule based off when your at work or when your home.