Review: The Magnolia Hotel was chilling 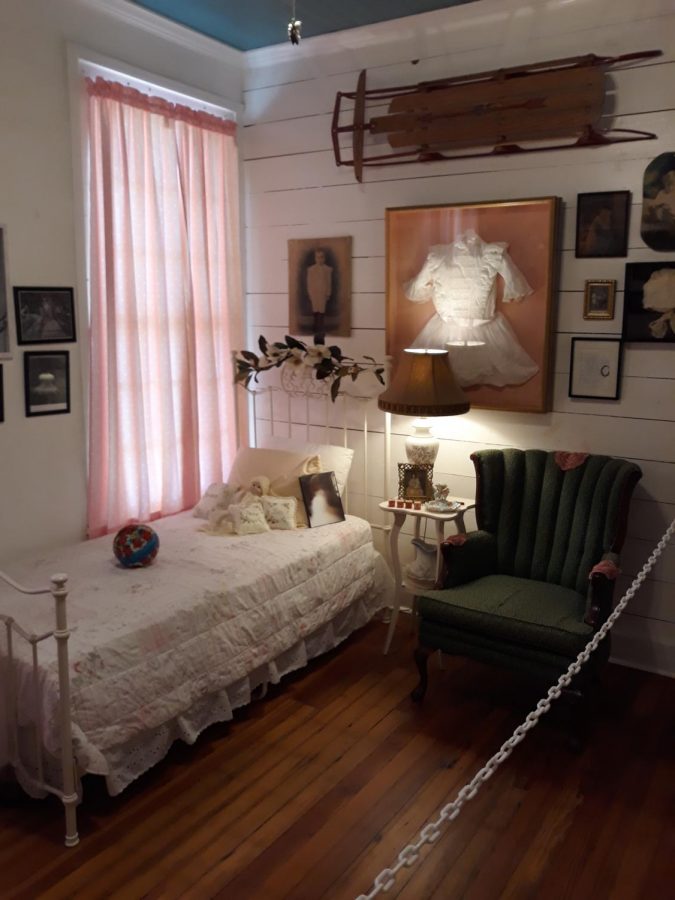 The Magnolia Hotel. The bottom floor was filled with old antiques.

My name is Aislynn Warren an 8th grader here at Dobie. I went to the Magnolia Hotel with my mother and 3 younger siblings. I’ve always wanted to learn about the afterlife and ghosts since I was young so I was drawn to the hotels gruesome history.

My overall experience at the hotel was something I’ve never felt or seen in my life. I was feeling as if someone was sitting on my chest making it harder to breathe. I constantly felt as if people were staring at me while I was walking through the rooms. In some rooms a cold breeze made my hairs stand up. The hotel was a terrifying but amazing experience. The staff were kind, they helped ease the atmosphere of the cold and chilling hotel.

According to The Magnolia Hotel website, it started of as a two room log cabin to James Campbell, one of the first Texas Rangers who was later killed by a group of Comanche. James’s cabin was sold to a businessman Joseph F. Johnson after Jame’s death. It was the first hotel of its time to have a stagecoach  station. It was eventually passed down more through different owners until 1850 when William Sims Read and William Carpenter bought the building.

The house stayed open until the late 1990’s the building was still operating. The hotel was sadly abandoned becoming a place for homeless people to live in or for drug deals. This lasted until 2013 when the Ghedi’s rescued the abandoned building. They hoped to restore the victorian hotel back to its original state.

The bottom floor was filled with old antiques and portraits of the previous people who stayed there but, when I went up  the creaking old stairs I felt uneasy and on edge. The stairs were covered in photos of the deceased who lived there, I felt as if there eyes were following me while I walked to the second floor.

The first room I saw was a bathroom, the walls were pink and white, with a bathtub were a woman had killed herself in. The atmosphere was dark and dry, I was genuinely scared for the first time in a long while. My first instinct was to get out of the room, but I stayed. I feel like magnets were pulling me in two directions, one near the door another near the bathtub.

The next room was nicknamed “The Prisoners Hotel’. Many family members of prisoners stayed there the day of their execution to watch them be hung on the hanging tree. My hairs stood up when I walked into the room. I looked at the photos of the previous jail and felt sadness creep up onto me. I asked my sister, “Do  you feel sad as well?” She responded with a simple, “No” and followed my brothers into the next room.

The most notorious room was Itsy’s room, she was a young girl who died in the house and is famous for singing her favorite song “Itsy bitsy spider.” She was taken care of by a woman named Rosebud. Rosebud was known as a “gentlemen’s entertainer.”  She took care of Itsy when her mother went out to work. One day Itsy was found dead under suspicious c that alluded to murder. I felt sad in the room as if a weight was placed on my shoulders. I looked around at the photos of Itsy and wanted to cry.

The next room was the room of Rosebud. One of the staff who was dressed in Victorian clothing told us about the hauntings, saying, “I was drawn to this room because I felt as if this was the safest room in the hotel.” She said she had previous experiences in different rooms, the most notable was Faust’s room.

Faust was a small German man who had accidentally murdered a small girl  and blinded his wife. His spirit still haunts the room he slept in the night of the murders. He was known to scratch anyone who went into his room including the staff. I walked into Faust’s room and felt an aching pain in my chest, I went home later and saw a bright red scratch on my chest.

The last two rooms had no recorded hauntings but were on the side of a looming staircase that led to the street below near a small hall. My stomach twisted into knots looking down the staircase from the rooms. I felt as if something was watching me from the end of the stairs but mustered  up the courage to walk down them. When I made it to the street below I had a weight lifted off my shoulders, like I was able to breathe again. I looked to my mother and sarcastically said, “Well…that was lovely.”