This is Dominguez's first year at Dobie 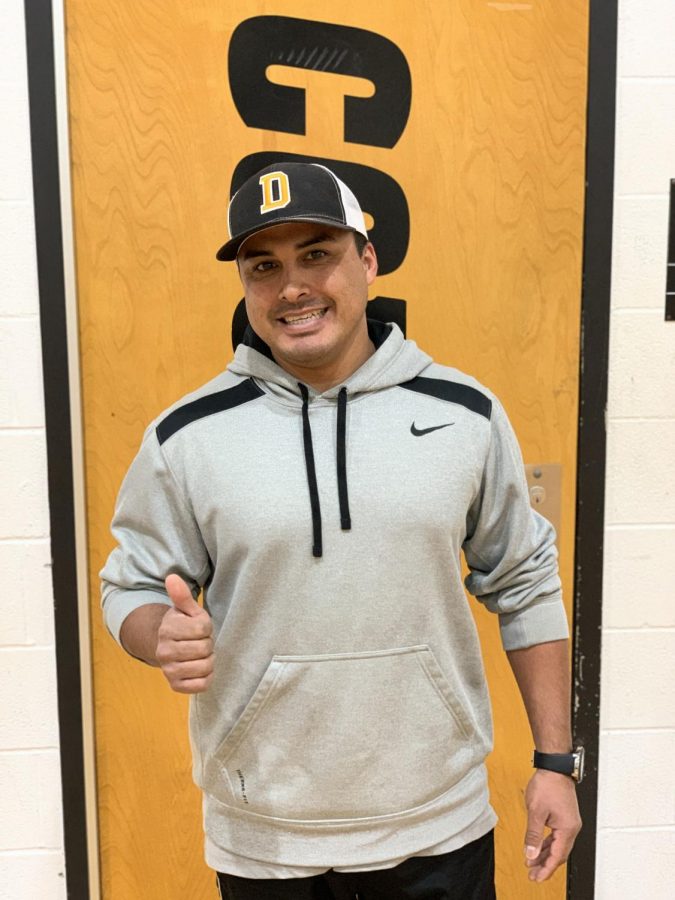 Being an athletic Coach and a CCR (College and Career Readiness) teacher is definitely not an easy job to do, but Coach Justin Dominguez does it every day with patience and care. He is very active with his students in the gym and in the classroom. Students and staff know that he is caring, considerate and respectful with his students and colleagues. His students say that he is enjoyable to be around.

Coach Currie who teaches social studies, said it’s optimism and positive that sets Coach Dominguez apart from others. “He always looks at the glass half full,” he said. He empathizes and he always makes the best of the situation,” said Coach Currie.

Coach Dominguez has a simple but incredible background. He grew up in the rural town of Taft, Tx, a South Texas town that calls itself “the friendliest cotton-picking town.”

His family consists of three brothers (one older and two younger) and two dogs, Rugrat and Sonny.  He said that he always appreciates his mother and grandmother because they always had delicious home-cooked meals for him at dinner.

Technology was not popular when he was growing up, so he spent most of his free time outside with his friends. He would play baseball, pick-up football games at his high school stadium or ride his bike around the neighborhood.

When he was a junior in High School, Coach Dominguez was in a terrible motorcycle accident. He was a varsity athlete on his football team. He remembers waking up in the hospital with so many “get well” cards with so much love from his team and Coaches. His Coaches and family were the ones who gathered the team and school members to meet at the hospital to support him. He knew from then on that, he wanted to impact lives like the coaches did for him.

He chose to go into the teaching field after tutoring several college classmates. His college classmates always mentioned that he made the math concepts easier to understand and he was good at relating it to the real world. A couple of years later, he majored in kinesiology and minored in mathematics. He also earned a Masters in Educational Leadership and Policy Studies.

A while back he had the opportunity to go back home and coach and teach in Taft, Texas and it was there that he developed his love for teaching and coaching. He said it was an incredible feeling being able to go back to his roots and give back to my community.

Coach Dominguez said the best part of his job is: “Being able to learn from [his]  students every day.”

For Dominguez, the biggest challenge of being a teacher and coach is the time. “It seems like there will never be enough time in the day when you are Coaching and teaching,” he said, adding that balancing his time on each task is one of the only ways to overcome this challenge.

Antonio Padilla, an 8th grader on the B-football team,  said that Coach Dominguez is a great coach who is passionate about what he does. “He is very responsible and energetic and he cares about the kids that he Coaches,” he said.

Riley Thompson, an 8th grader on the B-football team, said that Coach Dominguez has made a big impact on him. “He is a mentor and role model because he helps me on the football field.”

Dominguez said that he strives to do his best in and out of the classroom. “To be a great coach, you must also be a great teacher. Coaches dedicate their lives to teaching student-athletes how to be successful in the current sport but most importantly in life,” he said. “The greatest feeling that I get as a coach is when my former student-athletes come back and shake my hand, look at me in the eyes, and tell me that I made a positive impact in their lives. As a coach, you are constantly teaching life long lessons such as being disciplined, living a healthy lifestyle, learning how to compete and showing sportsmanship.”

Emma Alfred, 7th grader, said she is in Coach Dominguez’s seventh period College and Career Readiness class. “He’s very dedicated to his job. “If somebody messes up, he wants them to try harder. He’s also a really funny teacher,” she said.

Hailey Gorzell, 7th grader, is also in Coach Dominguez’s seventh period College and Career Readiness class. “He is very positive and makes everybody laugh and he is my favorite teacher.