Celebrities these days, are they good influences? 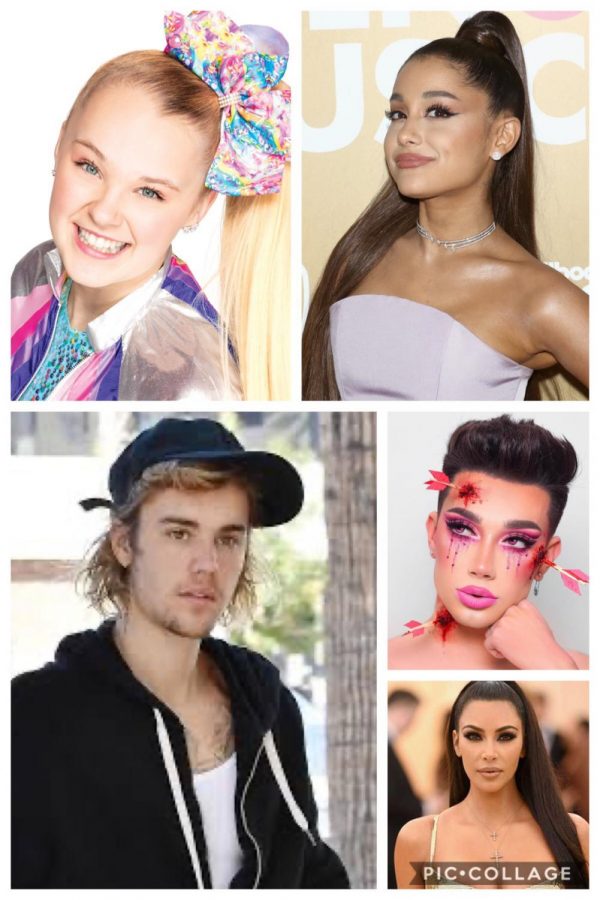 With the Internet, celebrities are all the rage. They have their own Youtube channels and Tweet, Snap, Insta, etc. to share their lives as they unfold.

Cardi B, Jojo Siwa, Billie Eilish, The Paul Brothers, Justin Beiber, Selena Gomez, James Charles: what do all these people have in common? They are some of the most popular celebrities of the 21st century. But whether or not they influence this generation in a good way is in question.

Jojo Siwa is a Nickelodeon actress who is known for her bows and fun songs. She currently is on tour.

Some Dobie students say that celebs aren’t the most positive influences. Zariah Goodlow is a 7th grader at Dobie junior high school. “Celebrities are not good influences on their younger viewers because they try to turn everything sexual. That’s why I admire JoJo Siwa,” said Goodlow.

Some Dobie students believe that celebrities are helping shape the kid’s futures in a good way. Caroline Dickens is a 7th grader at Dobie. “I think that some are good for the young because kids always look for someone they can look up to with the same careers and stuff they want to be or have,” said Dickens.

Cardi B became famous for her honesty of her past and her song Bodak Yellow.

For some, celebrities can their gain followers and viewers by speaking their mind. Aaliyah Malik Aranda is an 8th grader at Dobie Jr High. “Cardi B is probably my favorite because she’s always speaking her mind. She doesn’t let others put her down or take her voice. She is a good influence because she teaches me and others to do that too,” said Malik Aranda.

People believe that a misunderstanding can lead to belief of a bad influence.

Billie Eilish became famous thanks to her different styles of music and less than perfect  personality.

Janae Francis attends Dobie Jr. High and is in 8th grade. “My favorite is Billie Eilish. She’s always saying and writing about what she thinks. People may not think she’s a good influence because they don’t understand her,” said Francis.

There are many celebs that make us wonder how they became famous in the first place.

RKelly is a singer / songwriter and has received 3 grammy awards.

Airielle Buglin Is a 7th grader at Dobie jr. high “R.kelly is my least favorite, because he [allegedly] assaulted young girls,” said Buglin

Celebrities do lots of things that are questionable. That can make lots of people dislike them.

KSI is a youtuber who is known for his boxing, diss tracks, and vlogs.

Becton Leon is a 7th grader at Dobie. “I really don’t like KSI because he’s annoying and has a huge ego. He is a really bad influence because he treats girls as if they are prizes to be won,” said Leon.

The way they put their emotions out there can affect that too. Jacob Glatt is in 7th grade at Dobie. “Billie Eilish is probably my least favorite because she is fake depressed. She’s a bad influence because when she acts that way, she teaches and shows young teens that they have to act that way too to be cool or different,” said Glatt.

Some people miss the celebs’ lifestyles when they were younger and more innocent. Elise Moore is a 7th grader at Dobie jr high school. “I hate Justin Beiber because he used to be sort of innocent but he’s turned very inappropriate. He is a bad influence since he basically teaches kids that his kind of behavior is okay,” said Moore.

Justin Beiber is a singer who is known for his songs like “Baby” and being one of the worlds best selling music artists.

People can get good vibes from celebs because of the things they do.

For many,  Celebrities are straight queens

Beyonce is a singer that is known for her great set of pipes and her beliefs.

Airielle Buglin is a 7th grader at Dobie jr. high “Beyonce is a good influence because she stands up for all women; She is a queen,” said Buglin.

Although some celebrities can be negative for this generation, that doesn’t mean all of them out there are. Some of them shape futures and some of them show kids that confidence is a great thing to have. Sometimes young people  just have to look for those few that can be looked up to.