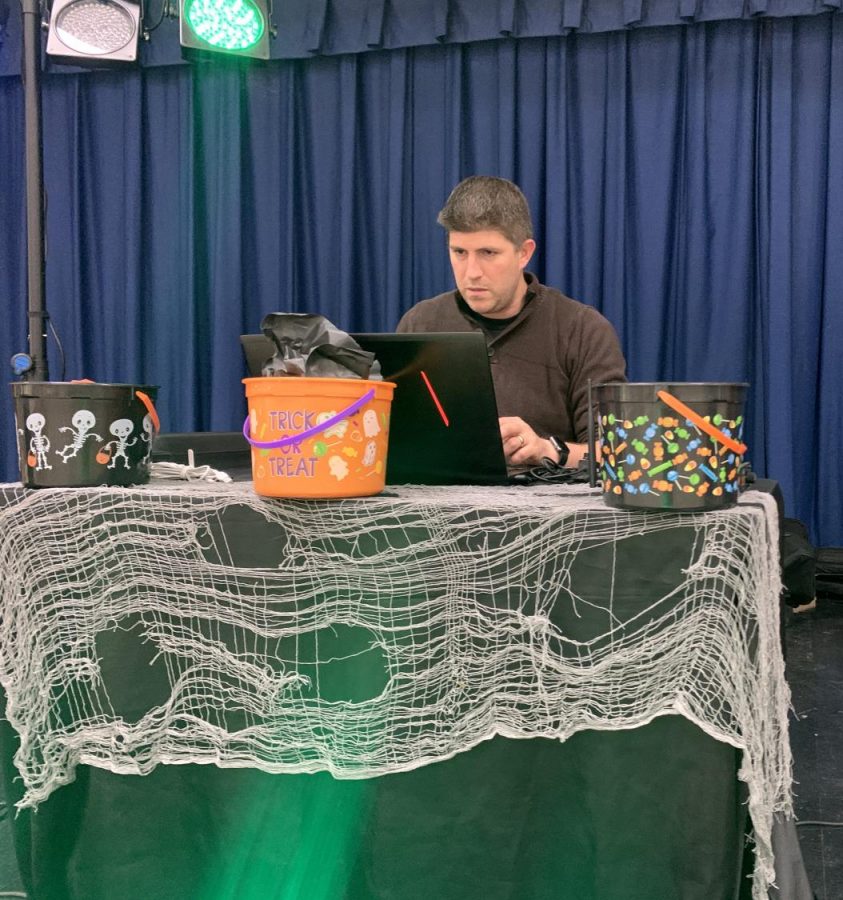 School dances are an important memory in most students’ lives. It’s where they get to experience a fun time with their friends outside of a school atmosphere. Of course there are rules to follow, but there isn’t a teacher just hovering over them like there may be in a classroom setting.

On the stage, in the center of the chaotic energy-filled dance floor, keeping the music live and turnt up is Mr. Barbee, the deejay who picks out all of the cool music.

“He’s good at it,” said Aubrey Thompson an 8th grader who is in student council and attended this year’s and last year’s dances.  “He chooses songs that he knows everyone will like. They get excited about it and hit the dance floor.”

orate the dance, run the snack bar and do so much more. With help from their teacher, Mrs.Hadas, they plan, set up, and run the whole dance.

Dobie’s Halloween themed dance was hosted on Friday, November 1, from 5:30 pm to 7:30 pm. The students were able to dress up in their costumes, although the dress code still applied. Students were not allowed to wear masks or face paint.

The music and light show were played by Mr. Barbee, the school dance deejay, who also happens to be Dobie’s band director. Mr. Barbee, who is married with two young sons,  juggles his family life, job, and being a deejay all at the same time. But he takes it all in stride. “Juggle is really the key word. Just like a juggler, nothing is random, you have to plan for how you’re going to transfer from one to the next,” said Barbee.

Mr. Barbee usually plays for an older crowd, so when he plays for the students, he tries to play the trendy music that the students will enjoy. “I typically keep my playlists within a few similar genres, at an age appropriate level, with a knowledge of what my audience likes along the popular spectrum. Then I also take requests.  If there is a genre that is getting a lot of requests then I’ll play more of that kind of music,” said Barbee.

He has a number the students can text if they would like to request a song for him to play. Some students also approach him on stage and request songs.

Mr. Barbee started out as a deejay about 5 years ago. He learned through his friends and colleagues when asked to help out. His learning process was really just messing around with different softwares that allow him to mix different music.

“I was asked by a colleague to help him deejay a wedding. After a few weekends of following him to gigs, I started going solo and running weddings by myself,” said Barbee.

Before Mr. Barbee was the deejay, the student council had to search for deejays. Mr. Barbee chooses to play at the dances because he enjoys doing it. Even though he usually does weddings, he always ends up doing the Dobie dances. “This is my third year as the Dobie dance deejay I get paid $250 per dance and we host two dances every year,” said Barbee.

In class, he’s more serious but also very fun. When I see him deejaying, he’s really relaxed and enjoying himself like it was any other party. The dances would be boring without him,” said Nianna Shaffer, 8th grader who is the wind ensemble and who went to this year’s dance and last year’s dance. “He’s pretty good with keeping up with music that kids like to listen to nowadays.”

He says that he also enjoys his job as a deejay because unlike when he is teaching, he is allowed to pick out the music he gets to play. When he’s teaching, he has a curriculum  that he has to teach and certain music that he has his students play to meet that curriculum.

“I really enjoy playing the Dobie Dances because of the energy the students bring to the event!  I typically play for weddings, which is a more subdued older crowd (typically), so this gives me a chance to play some really high energy music and enjoy the vibe of the dancers,” said Barbee.