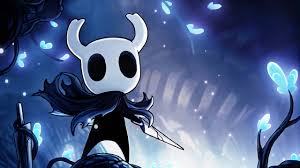 By: Greysen Alfred and Brendan Healey

In the game, the kingdom of Hallownest had fallen into despair and was overrun by the Radiance, a god-like moth creature forgotten by the Moth Tribe. The Moth Tribe was let into Hallownest by the Pale King, who expanded theminds of the bugs who presided in the kingdom. The Radiance was eventually forgotten and became upset about it. She started to Infect people or “bugs” as the game refers to them.

Puzzled, the king started creating vessels, empty creatures filled with void, to combat the Radiance’s rage. Time and time again, the King tried to create the perfect vessel but all of them failed except one… The Hollow knight.

The Hollow Knight trained by his father to contain the Radiance. With The Radiance contained, the king had no use for the other vessels. He threw the vessels in the abyss, a bottomless pit made from the shells of discarded vessels and broken dreams. Right before you show up the Hollow ‘knights shell cracks and the infection is free.

Hollow Knight is a game with style hand drawn and added 3d art to give it the feel of you actually being there and the game mechanics they wanted to make your character more controllable by making it more moveable.The scenery is beautiful. It’s a game for those who want a challenge, and those who like exploring, it is truly amazing.

John Simons, an 8th Grader at Dobie says he has played the game.  “As far as Hollow Knight’s story goes, the game is relatively complicated. The design is really simple, but it’s still a pretty good game,” said Simons.

The game’s choice in wording in poetic and sweet its poem about theHollow knight ( the black vault far above through its sacrifice Hallownest lasts eternal. This is the Hollow Knight’s memorial in the City of Tears.) is short but sweet and gives a bit of clarity to the Hollow Knight’s backstory.

All in all, I think Hollow Knight is a great game with a good amount of challange.