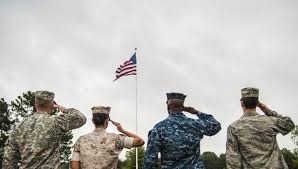 Veterans and members of our branches of the military are generally recognized in a positive way, which they totally should be. Whether it is a discount on a movie ticket or salute from a passerby, they are usually given general respect from the public.

According to VA.org a veteran is “a person who served in the active military.”  A veteran could have served in the Army, Air Force, Navy, Marine Corps, or the Coast Guard, either one they still served our country and put their lives on the line. All 5 branches earn GREAT respect from me and many others.

There are so many different ways to express your gratitude and thanks toward veterans. Military.com gives just a few. Although you can just follow a list, it is always good to just be creative! Celebrate Veterans in a way of your own, you don’t have to be told.

Both of my parents have served in the Army. We have moved 3 times and my brother and I have a combined total of 9 schools we have been to. My mom has served for 16 years and counting and my dad served 11 years. They have both been deployed to Iraq and Afghanistan.

I know about the hardships and moves that come with being connected to the military. I had to leave all my friends behind. One time I had to live with my grandma because my mom and dad were going to war, unsure if they were coming back. I might have been only two but those memories of saying goodbye are engraved in my mind. Some things are too valuable to forget or leave behind.

I would just like to give thanks, appreciation, and gratitude towards all veterans who served our country. Without this respect, without this acknowledgment, there would be far less members fighting for our lives.