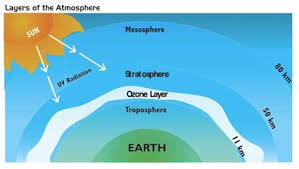 Everyone knows of the ozone layer the Earth is encompassed in, but does anyone understand it? What does ozone even do? You hear at least annually that the ozone layer is in danger, but why? Can it be fixed? These common questions are truly embarrassing to even begin to ask, but luckily, the answers are all here. The ozone layer protects Earth’s very fragile creatures from harmful rays of radiation, so it’s time to put it in the spotlight.

Ozone is important, we know that, but why is in necessary? Does it do anything? According to Rice University, “Ozone is a gas in the atmosphere that protects everything living on the Earth from harmful ultraviolet (UV) rays from the Sun. Without the layer of ozone in the atmosphere, it would be very difficult for anything to survive on the surface.” Simplified, ozone protects us from the sun’s harmful rays, allowing life on Earth. Essentially, without ozone, going outside would give you very dangerous dosages of harmful radiation.

The ozone layer has actually been mostly repaired already. At this point, we need preventative measures to ensure it doesn’t rupture again. The reason it was saved was the montreal protocol, which according to the Natural Resources Defense Council, is “the treaty that saved the ozone layer, saved millions of lives, and avoided a global catastrophe.” The article also states that we can phase out of HFC, a harmful chemical, and begin to undo climate change. To keep the ozone layer from taking more hits, we need to cut down on air pollution and the use of harmful chemical products; industrially or otherwise.

This issue, though mostly solved, is still extremely relevant. The ozone layer may be mostly healed, but there are places where the ozone is thinner than others, and people living there have a serious health concern. The Union of Concerned Scientists summed up the issues with the ozone layer quite well. “The term ‘ozone hole’ refers to the depletion of the protective ozone layer in the upper atmosphere (stratosphere) over Earth’s polar regions. People, plants, and animals living under the ozone hole are harmed by the solar radiation now reaching the Earth’s surface—where it causes health problems, from eye damage to skin cancer.” That means that the animals in the melting polar regions are also at risk for cancer and blindness, awful afflictions that spell certain doom for most animals.

The ozone layer is an important part of Earth’s fragile ecosystem, and saves us from harmful UV radiation. In places where it is weaker, you are at increased risk for skin cancer and eye damage. To keep it safe, we need to cut down on air pollution and the use of harmful industrial chemicals. The ozone layer is keeping us healthy every day, so the least we can do is return the favor.