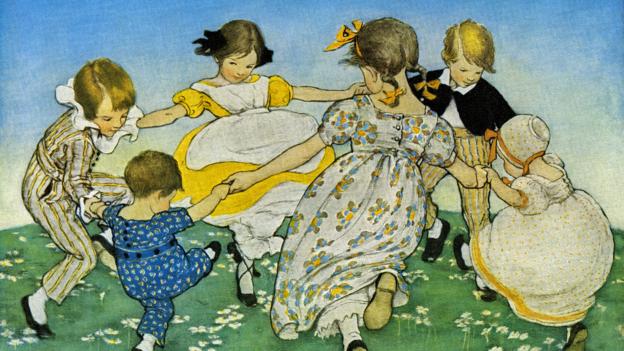 UNITED STATES - CIRCA 1900: Jessie Willcox Smith (1863  1935) was an American illustrator famous for her illustrations for children's books. She captured the innocence of children and worked for many magazines as well as book publishers. (Photo by Buyenlarge/Getty Images)

Once upon a time, back in a small-town built in 1884, there lived a gentleman who was a very peculiar man, to say the least. He stood as tall as a house, towering over all the townspeople. At first, they were scared.

“Where did he come from?”

But soon, they came to love him.

He became the treasure of the little town and everyone knew him, though they never knew him by name.

Every day for years he would walk down the cobblestone path, with his patched-up suit, top hat on top of his head, and the rhythmic tapping of his shoes against the stone. From the first chirping of the birds at dawn to the singing of the church bells at dusk, he would run around and play with the town’s children. They would play all sorts of games before lying down in the soft green grass as he entertained them with his stories of adventures. Their eyes would grow heavy as they slowly dozed off, exhausted from the adventurous day they have had. The man would stop his story and chuckle as his little friends let out a tiny snore.

“My… looks to me it’s about time you children go home,” he’d say as he lifted them up and walked them home to their beds.

Though as the years passed, and all the townspeople had grown older and gotten wiser, the tapping of the man’s shoes faded away until he was nothing more than a tall tale. Some began to think he was nothing but a dream, that the man as tall as the trees was nothing but a town myth that they had all longed to be true. Still, in respect of their old friend they kept the stories alive.

When the town’s children had finally grown to have kids of their own, they would share the stories and bizarre adventures that the man had once told them.

“He would set you on top of his shoulders and if you reached up, you could touch the clouds!”

“You’d know he was coming to town by the loud thumping of his shoes down that old path. We had offered him a new pair, less loud shoes, yet he shook his head with a smile, “There’s no need, these work just fine!” he’d say.”

Many wished to meet the man just one more time to prove to the new generation of children that their childhood friend was not just a story they were told. But sadly, that day didn’t come for a long time. Time passed. When only a few of the town’s kids were now old and frail, sitting in their rocking chairs waiting and watching their grand kids run around the yards. Some of their ears would perk up at the familiar tapping of their old friends shoes against the worn cobblestone path.

He walked up to them, looking just as he did when they last saw him. With a tip of his hat he called out to each of them by name with that soothing voice they had yearned so long to hear just once more, his gloved hand stood outstretched as he guided them back through the woods they had memorized in their youth. It was as if they were children again. Their bones no longer ached as they ran around and played games just like so many years ago, and just as they had before, they began to grow tired as they laid in the green grass listening to the man’s stories. Their eyelids grew heavy and the man smiled so kindly as he guided them back to their homes where their lonely rocking chairs waited patiently for their owners to sit in them once more.

“But wait! When will we see you again?’’ they called out.

The man frowned, he looked sad as he lowered down onto one knee. “Well my dears, my time to watch over you has come to an end. Though don’t be scared; all stories must come to an end. Even mine and yours.” With a gentle kiss on the hand, the man rose to his rightful height, setting his top hat on top of his head.

“Till we meet again.”

The tapping of his shoes grew quieter and quieter ‘till it couldn’t be heard. The grandparents who had waited so long to see their old friend, closed their eyes with contentment, a satisfied grin resting on their faces as they drifted off into a blissful sleep.