Personal view: Jesus wants His people to worship Him during tragic happenings around the world 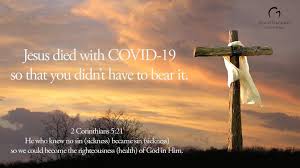 God doesn’t see that people are believing in Him so I believe that He sent some things down to earth to prove that he wants His people to believe in Him. In 2 Chronicles 7:13-14, Jesus sent locusts to eat the crops in South Africa, He disabled the rains in Australia (Australian Wildfires), and a virus on his people (COVID-19). He wants to make his world a better place and He feels like this is the only way.

The world was slowly turning bad and he knew he had to do something about it. I don’t feel like it was a coincidence because it was so timely. People are still out commiting crimes and doing illegal things because they don’t believe in Jesus Christ. I’m starting to believe that the world will only evolve into more problems as the illegal content continues.

Jesus will cure his world as he sees more and more people praying for him and worshiping him because he knows we can have a successful world with loads of great people. Helping the homeless and putting others before yourself is a simple, but powerful act of kindness. I see people carrying on a normal life as the virus is continually spreading which is causing Jesus Christ to think his people aren’t worshiping him as they should.

All tof he tragic happenings in the world aren’t all based on bad things around the world, but most are. I guess you could say everyone overreacts but they do it because they love each and every person on the earth. They love them because they know god would want them to. Following Jesus Christ and worshiping his name and truly believing in him will let him know that people are realizing he is real and he can guide them to the best life possible.

God sends all the things down to earth and will hopefully make his people realize that he can help them get out of any situation but they have to give their life to the lord and be saved. People committing crimes and doing illegal things won’t help our earth evolve into a better place. I feel as though if everyone came together to fix our broken world, we will then realize having the lord with us all the time will be beneficial in the long run.