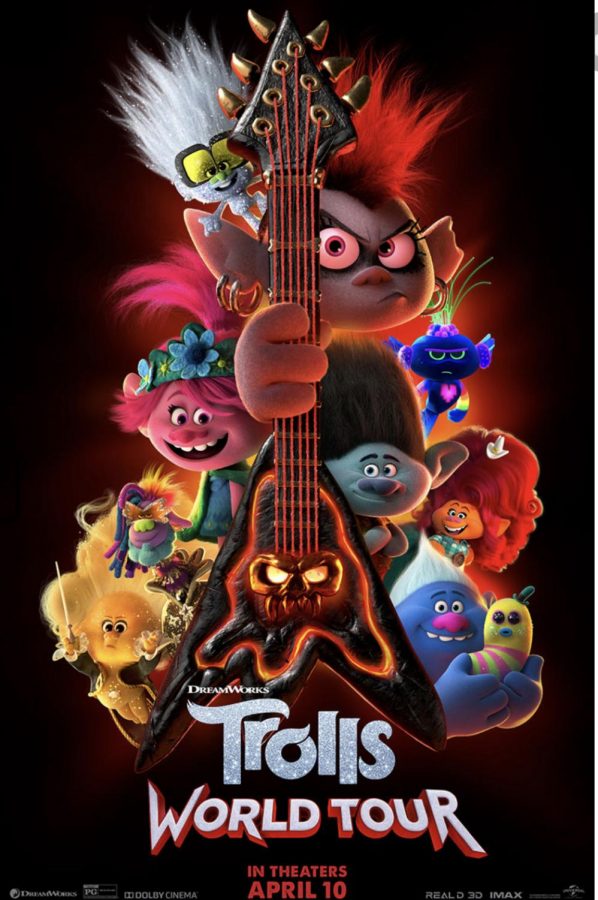 “Trolls world tour” is a funky, groovy colorful movie, but has a very different concept than the first movie “Trolls”. In this movie, Poppy and Branch find out that there are 6 different troll tribes living all around them.

The tribes are all devoted to a different music genre- Pop, Classical, Country, Funk, Tecno, and Rock. Queen Barb, queen of rock, wants to unite all the trolls but under rock music destroying all other genres. Poppy and Branch go out on a mission to make sure this doesn’t happen and to save the other genres from not becoming extinct.

I really love the overall message and diversity in this movie. I love how every genre has their own style and the movie explores music diversity. The movie doesn’t only have the 6 main genres and has some extras like- Kop, Reggaeton, Smooth Jazz,etc. I personally would have liked to see rap as a genre because rap has a very big fan base, and I would have loved to see some trolls rap.

Other than that I loved the graphics and the voice actors they picked for each music genre. All the actors really defined each genre in real life, like Ozzy Osbourne for King Thrash, Queen Barbs Dad, Gerorge Clinton as King Quincy, Mary J. Blige as Queen Essence, etc,- IMDb. This movie is very upbeat and it is pretty funny.

I read some of the reviews on this movie and there was a good handful that didn’t like it. One 11 year old said, the movie had way too much singing to the point that it was obnoxious. The whole movie is about music, so I don’t see why they thought they would only be a little bit of musical cameos.

Also if you watched the first Trolls movie, you would realize that the trolls love to sing and dance. Another thing a lot of people were complaining about was how the Rock trolls were portrayed, and they didn’t like that. People said that the music genre already gets quite a lot of backlash because of just how rock sounds and how most people that listen to Rock dress.

I do agree that Rock does get a bad rap because people perceive the music as sinful and scary when really it’s just not the case. I don’t think the directors were trying to give that vibe off though. And if they were Ozzy Osbourne, being a Rock music artist, would have probably not been in the movie or said something about it.

The different culture representation to the message and good vibes in my opinion makes this an enjoyable movie. Everyone is different in their own ways making them unique and we should never try and hide the fact that we are different, and we should never judge others for that. King Qunicy, voiced by George Clinton, in the movie talks about how we’re all different from one another but we should embrace it.“Denying our differences is denying the truth of who we are,” said Quincy.