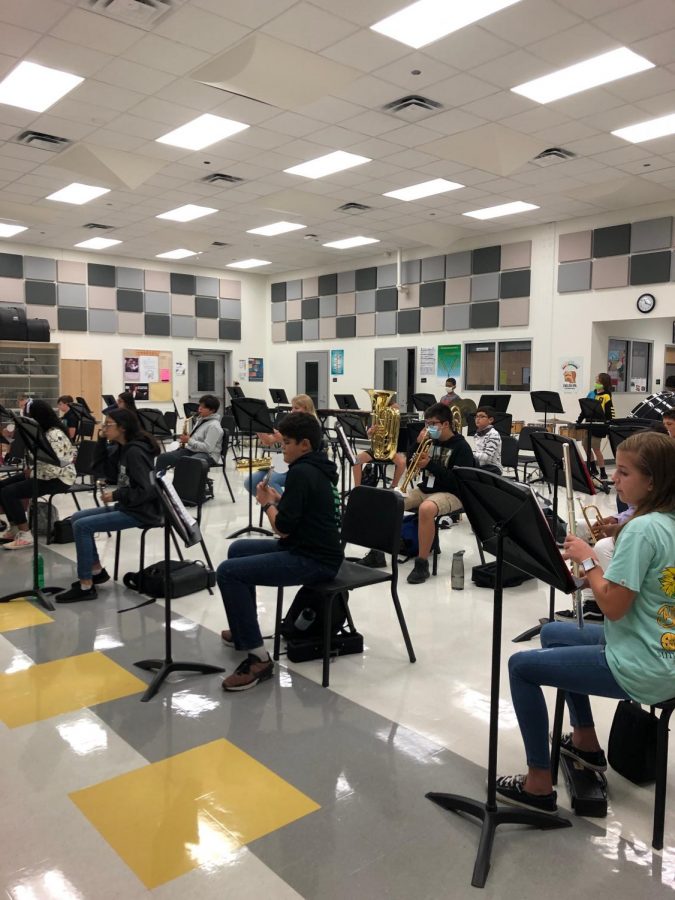 COVID-19 has affected everything in our world, and band is no different. Band concerts are different this year– but they also prove something very important:  COVID-19 Pandemic didn’t stop them, Mr. Barbee or Mr. Daniel.

At the end of last year, concerts were canceled when COVID-19 shuttered schools, including Dobie.

For many students, the Fall Concert was their first concert for months. Some band students don’t even remember when their last concert was. Since all students were online for the first three weeks of school, the band had very limited time for practicing which is why every band only played one song for the concert. But…it still happened, and that is something that band students and directors are proud of.
Fall Concert — Dobie’s first online concert experience
For Dobie’s first online concert experience, the five bands were recorded playing their Fall songs during class. Remote students recorded themselves from their phones and sent them to directors Mr. Daniel and Mr. Barbee. All students wore their band uniforms, including remote band students.

So many students lament that they still wanted an in-person Fall concert. “I would prefer an in-person concert because you can add more personality in music,” said Mackenzie Fields, a 7th grader in the Wind Ensemble. Some students think they could have done an in-person Fall concert but others do not. “The audience can be 6 feet apart in rows, as for the online students, it would be optional if they wanted to attend,” said Gabriel Salanguit, a 7th grader in the Symphonic Band.

All of the bands are still working extremely hard and we can’t wait for the Christmas Concert. Band Director Mr. William Daniel said that he and Assistant Director Mr. Barbee have tried their best to incorporate all students — both in person and remote — to participate in class and grow their skills.

“We’ve had a great time working with our students this year.  It’s a bummer that we can’t see everyone in class, but we’ve made class available to everybody.  The remote students can join us live on Zoom for rehearsal,” said Mr. Daniel. “We also post the rehearsals in Google Classroom for students to practice.  We want all the students to be able to participate as much as possible, and the virtual concert is a good way to do that.”

A 7th grader, Tricia Roberts, in the Symphonic band said she really enjoys the music selected, “I love it. It’s so upbeat and it gets my blood pumping.” Tricia Roberts is also a little nervous, “Because of us recording the concert and it being the first concert.” The Intermediate Band is playing Mystic Legends. “I think having an online concert is a great idea,” said Jordann Neskora, 7th grader in the Intermediate Band. The Concert Band performed a piece called Uprising.

With online concerts this year more people would be able to see them since it isn’t going to be in a big auditorium. For the online concerts this year, band students will be able to show many more people. “I like that we can watch the concert over and over again,” said Neskora, 7th grader. Let’s say you have grandparents who wanted to see the band concerts but couldn’t, now they can with it online. People can now watch the concert in their own home where they might feel safer because of Covid-19.

“I think it went well but it was a little weird being recorded,” said Briana Gonzales, a 7th grader in the Symphonic band. Briana doesn’t like that they were doing it online. “I don’t really like that we have to do it online but I know it wouldn’t be possible to have a normal concert,” said Gonzales.

​Mr. Russell Barbee, Asst. Band Director, said that students were tasked with sending a video of themselves playing along with a click track or class performance.  “Then I used a program called Davinci Resolve to edit and align the videos,” he said. ” The first video, “Carnivore” took almost 20 hours of processing to figure out what I wanted to do and how to make it work, then the subsequent videos took about 3 hours to complete.”

Plans for an in-person concert: The Christmas Concert
For the Christmas concert, there are going to be more songs than one.

The concert band is learning Bells of Christmas, Bleak in The Mid Winter, and 20 Carols. Mr. Barbee and Mr.  Daniel both said there will be a live concert for Christmas.

The band uniform for the performance will be the black band shirt and blue jeans that are not ripped or have holes in them. If band students have not purchased a band shirt, they can still do so. If they have purchased and have not received their band shirt they would have to go to the front office and pick it up. If there is no possible way to get a band shirt by the time of the performance then they would have to wear a plain black shirt with blue jeans, the jeans can not have rips or holes in them.