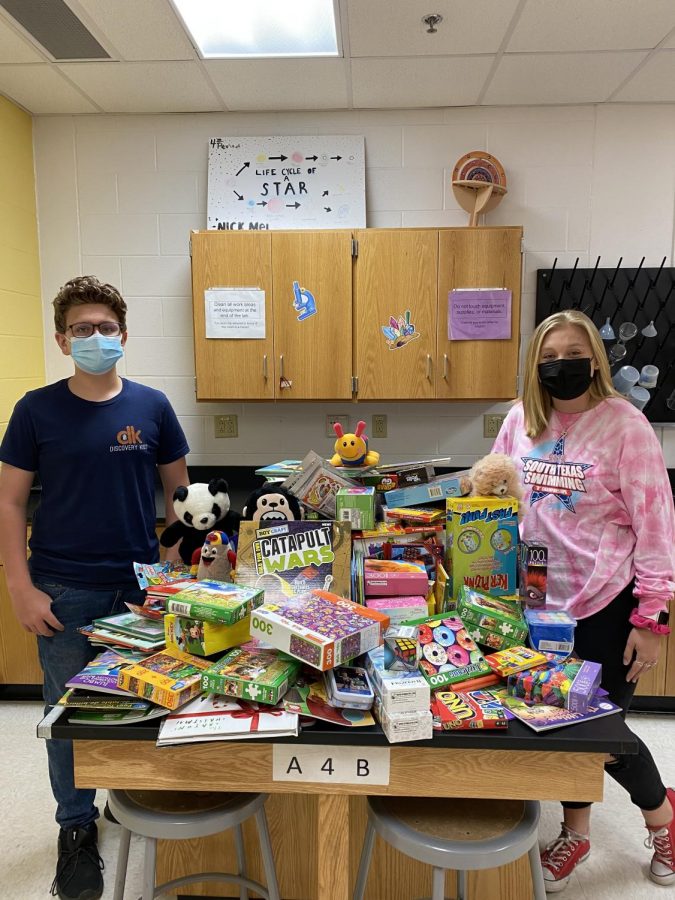 NJHS Treasurer Kyle Banks and President Madison Gastol, 8, pose next to the haul of toys, books, and games for the donations for The Women & Children's Shelter.

Around late March, the National Junior Honor Society held a toy drive for The Women & Children’s Shelter of San Antonio as their big group project of the year.

NJHS had been talking about ideas as their big service project and decided on doing a toy drive. There were a few other ideas NJHS had thought about, “A couple of ideas were recycling old bottle caps and other products that harm our ecosystem, raising money for a mental health organization, and a can drive for the homeless shelter,” said Marisa Estremera, 8th grade.

NJHS raised a very good and large amount of toys, they collected around 100 items, ranging from books, toys, and personal care items. They started gathering donations around late March and finished around April 17th. They thought it would be a good idea to give back to kids their own age and younger.

NJHS also had a fundraiser to pie a teacher in the face. The pie in the face fundraiser was more of an incentive for other students to donate. “We realized that without giving an incentive, people would have a less drive to donate,” said Estremera. “I think the pie in the face was a pat on the back to everyone for doing such a good job with donations and really giving our all in giving back to our community.”

NJHS was really able to build a good connection with other kids in the community. The donations will be delivered this coming week to The Women and Children’s Shelter of SA.