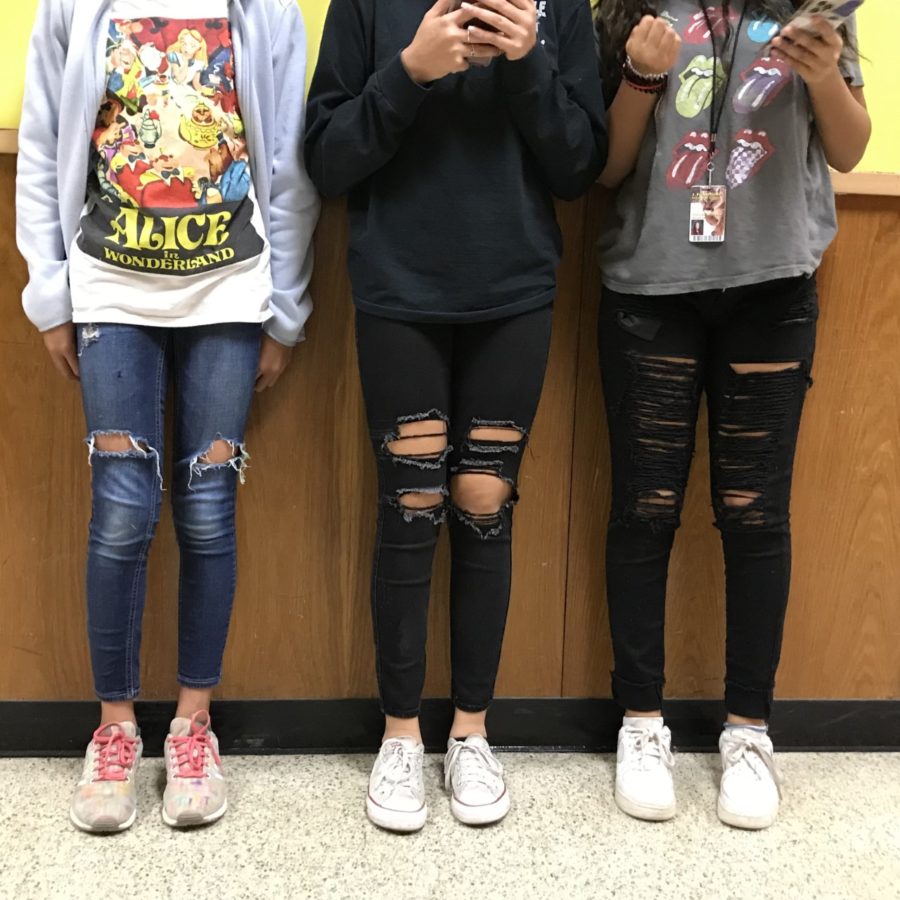 The ripped jean debate continues among students, leaving some to feel that female students are "targeted" when it comes to dress code rules and regulations.

Racheal Martindale, 8, turns over, desperate to avoid the light peeking through the window, jolting awake when she realizes what time it is. Throwing on the first thing she grabbed and raking her fingers through her hair, she rushes onto the bus, tapping her foot impatiently as they slowly make their way toward the campus. She barges through the wide glass doors, speed walking to class with only a minute to spare. An administrator she hasn’t bothered to learn the name of gives her a glance and yells out a harsh, “Wait!” walking over briskly and ignoring the bell that alerts Racheal of her tardiness. The administrator points disapprovingly at the hole making itself comfortable high up her thigh, the corner of a pocket peeking out. Racheal didn’t mean to wear these pants, it was a total accident. But now, on top of being dress coded, she’s also late to her first class.

Dobie’s dress code has always been a very controversial topic, with opinions varying across every student and administrator. Dobie’s students have shared their views on what they believe regarding the intent behind the school dress code.

Angelica Gonzalez, 8, commented over her personal beliefs regarding the policies and what student groups they affect the most.

“It’s messed up. Girls get dress coded way more than guys do,” Gonzalez argues. “It just shows that girls are objectified. They’re constantly called out for even the smallest things being shown. ”

Gonzalez referenced the policies listed in the Student-Parent Handbook in which the book states, ‘Halter tops, crop tops, exposed midriffs, strapless and/or low-cut tops that expose breasts or cleavage, exposed backs, spaghetti straps, and see-through clothing are not permitted,’ referring to clothing items most often worn by women, the same applying to the policy, ‘Dresses, skirts, skorts, and split-skirts will be permitted provided that they are no shorter than mid-thigh when seated.’

Despite their opinions over the targeting of women, both students agreed that the original intent behind our school’s dress code is reasonable.

Gonzalez claimed, “What they were doing was right but they just didn’t influence it correctly. The time going into dress coding students only takes away from our learning time.” Martindale agreed, suggesting that, “the dress code was created with good intentions but how and the situations in which students are dress coded isn’t really all that necessary.”

At the end of the day, each student and staff member will always have differing opinions over what is necessary or what is not but most can agree that the dress code is applied for the benefit of everyone, whether it be a student or teacher.