MLK Jr: A Man Who Made A Mark in Today’s World 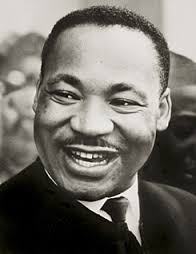 Monday, January 16th is Martin Luther King Jr. Day. This day marks the birthday of a man who stood up for what he believed was right, who made a mark in cultural differences, who wrote and spoke the amazing speech I Have A Dream.

MLK spoke the truth and people really started to listen to what he had to say. With the help of many activists, MLK helped make the world a better place for his family, his friends, and our future.

“My family and I watch the parade on TV every year,” Jayden Hicks, 7th grader said. “I would definitely like to see how the parade operates and how they make it happen,” Hicks said. Hicks said she is glad that MLK did what he did so that people of all color can be together.

Reina Huff, 8th grader said that she thinks what MLK is very iconic and it influenced the future as we know it. “It’s cool to look back at history and see how far we’ve come from discrimination and segregation,” Huff said. “He changed how we treat people of color, and how they are equal to everybody else, so we should treat them with respect,” Huff said.

“If it wasn’t for him speaking out, there wouldn’t be different races in the same school and we wouldn’t be able to do things like drink out of the same water fountain,” Kaylee Brooks, 8th grader said. “Without him and his bravery, everything would be different. It’s wrong that the U.S. didn’t think segregation was okay to begin with,” Brooks said.

Martin Luther King Jr. was born on January 15, 1929 in Atlanta, Georgia and died on April 4,1968 in Memphis, Tennessee. He was married to Coretta Scott King and had 4 kids, Bernice, Dexter, Martin III, and Yolanda. He went to Morehouse College, received his bachelor’s degree from Crozer Theological Seminary, and received his PhD from Boston University.

Courtney Crowe, 8th grader, said he has brought blacks, whites, and other races together when he helped end segregation so everybody would get along.

“Martin Luther King Jr. fought for civil rights, and he believed that race shouldn’t be discriminated in any way,” Valerie Gonzalez, 8th grader said. Gonzalez said that she would definitely want to check out the annual March held in San Antonio on MLK Day.

Diego Ingle, 7th grader, said MLK’s legacy is very inspiring and that he changed America for the better.

MLK is one of the most important people in civil rights and black history, and nobody will ever forget him.