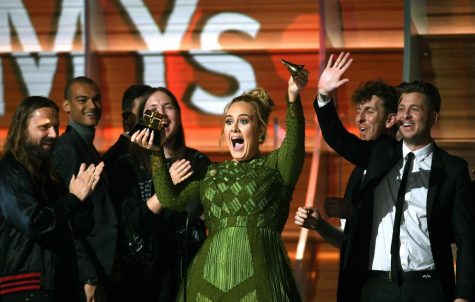 Adele at the 2017 Grammy's breaking her award for Beyonce.

The Grammy’s have been around since the 1950’s when they started the Hollywood Walk of Fame project. The music executives behind this decided that more people deserved their own form of a star on Hollywood Boulevard. Much like the Oscars and the Emmy’s, these music executives created the Grammy’s to give these deserving people awards.

This year, the Grammy’s happened on Sunday the 12th and it was held in the Staples Center in Los Angeles, California. The host was James Corden, who Maia (MJ) Reyes, 8th grader,  said was very entertaining as the host of the Grammy’s.

“James Corden was the host and it was really entertaining because he knows most of the artist from Carpool Karaoke, so he knows a lot of the lyrics,” Reyes said.

“I really enjoyed Adele’s performance (Fastlove by George Michael). She sang it really well and I could hear all the emotion in her voice,” said Gonzalez.

There were a lot of things that happened at the 2017 Grammy’s, like when Adele broke one of her awards because she thought Beyoncé deserved the award as well.

I never thought anyone would do something that big. She was sharing her, I guess, victory,” Reyes said.The performances were just part of the spectacular things that happened at the Grammy’s. Reyes really enjoyed Bruno Mars’ performance–his own and the tribute to the late Prince. She commented on his amazing voice, catchy songs, and killer dance moves.

Overall, performances and award acceptance was Reyes and Gonzalez’s favorite parts of the 2017 Grammy’s. This year’s Grammy’s is one for the books.