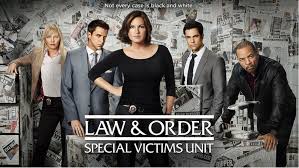 “Law and Order” is an outstanding show, it’s cool to me how you can solve cases just like that and find clues to every little thing. The show is mainly shot in New York.The first half of the show concentrates on the investigation of the crime by the police, the second half follows the prosecution of the crime in court.

The episodes keep my eyes aware and open because the crimes are so interesting, the reasons behind them, everything.“I watch law and order because I want to be in the law field when I grow up”, Tyshe Tyson 8th Grader. That may be reasons why most people watch it because it’s a very popular show.

‘Law and Order’ can be very dramatic at times, because it follows crime and investigation. The actors make the show a lot better, because they make it seem so realistic and that’s what I love about it, It’s like you’ll never know what happens next.“I personally can lay in my bed all day long watching it.

When I do watch it I usually watch up to 5 episodes a day. When I watch ‘Law and Order’ I don’t take any breaks at all because I don’t want to miss anything. I don’t like to pause the show because it keeps me on my tippy toes”, Tatianna Kilgore 8th Grader. This shows how intense the show can get.

Here are some interesting facts about ‘Law and Order’ that you probably didn’t know..New York City police officers love ‘Law and Order’, they consider it the most realistic cop show on T.V.

The original ‘Law and Order’ was cancelled in 2010 after 20 years on air. One of the main actors Dennis Farnia played Det. Joe Fontana, but was a real cop in Chicago for 18 years before becoming an actor.According to Serena Del Toro, “Law and Order is one of the absolute best shows on Netflix!”