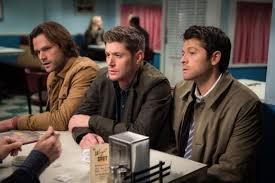 Supernatural debuted in 2006 and has been going strong for 12 seasons in about 11 years. The show has come a long way. A 13th season has been confirmed and should be released this September.

Although when compared to more popular TV shows the viewing rate seems small, the show means a lot to the 3.6 million people who are fans. The fans see it as an entertaining show and look forward to the ever rising drama that the two main characters, Sam and Dean cause because they keep resurrecting one another or make demon deals so the other lives. It’s a vicious cycle!

I argue that although he treated Sam as good as any other dad who leaves his children frequently, he treated Dean horribly. What is unique about how this is shown is just random scenes. It’s usually shown through Dean and how he acts when he talks about John.

Right now in the show, we’re at season 12. Satan is out and about, and Sam and Dean are trying to put him back in the cage. Castiel is trying to bend wounds with Heaven and the lasting angels. The plot from season one to season 12 has thickened. Instead of worrying about run of the mill demons, they are worrying about knights of Hell.

Castiel was introduced in season four and fell in love with the Winchesters, but from season four and season 12, Cas has gone through a whirlwind of emotions he feels for the Winchesters; He died a couple of times for Sam and Dean. He also went through a suicidal period in season eight because of all the grief he caused for heaven. He even let go of Dean’s hand when they (only Dean and a new character named Benny actually left to the Outside World) were leaving purgatory because he felt like he deserves to be there. After that (he left purgatory somehow but i’m not gonna tell) he ran around and  tried his best to deal with personal heaven matters while still being faithful to Dean ( and Sam ). But what makes this a big deal is that he can’t fully comply with heaven’s demand’s because most of the time, it involves removing a problem permanently if it has a .00002% chance of ruining Heavens plans, and usually it’s Sam and Dean. Season 8 will greatly explore Dean’s and Cas’s relationship and just how deep it is.

In between seasons we are introduced with many other characters, like Kevin and Charlie, who help Sam and Dean. Charlie specifically helped with getting critical information from an antagonist named Dick Roman. Kevin was a prophet who wanted to go to Princeton and be the first Asian-American president of America.Usually when new characters are introduced and they are not hunters themselves, they freak out. Kevin had some panic attacks and Charlie hit Dean in the arm with a plastic Lord of The Rings sword.

Also other monsters come in because of this one weird arc in season seven, dragons and some nasty worms that get in your ear and possess you. It’s just nasty. The actors who play in the show do lots to help out the community. Through their actions in real life, the actors and actresses show the importance of brotherhood and family. Misha Collins who plays Castiel, for example, posts photos on his Instagram to support donations to Alzheimer’s Association, an association that does studies in Alzheimer’s to find cures. Some of the actors and actresses also host fundraisers for anti-bullying campaigns.

The show may or may not have a very popular rating but the show means a lot to the people who watch it. The show is a great way to spend your free time and watch two brothers and an angel fight supernatural crime!