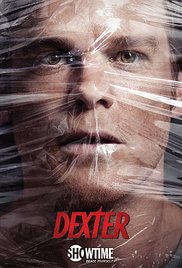 Dexter is a psychological thriller, mystery and crime show. It was developed by James Manos, Jr. This show is based off the compelling novels written by Jeff Lindsay. There are 8 seasons, with each season containing 12 episodes, so 96 episodes in all. The show first aired October 1, 2006 and ended on September 22, 2013.

The show takes place in Miami, Florida, and the main character’s name is Dexter Morgan. He is a forensic scientist specializing in blood spatter for the fictional Miami Metro Police Department. While he is helping catch serial killers, the twist is, he is a serial killer himself. But he only kills serial killers who have slipped from the justice system and gotten away, so how bad could he really be? This murderous show will definitely keep you on your toes.

Dexter is a great show and the plot keeps you on your toes.“I love Dexter because it is always thrilling and interesting,” said Reina Huff, 8th grade.

“I watch Dexter because the plot is always good, and the characters play their parts really well,” said Huff.

Dexter Morgan grew up with a twisted past. When he was only young, he witnessed his mother being murdered by being cut in pieces with a chainsaw in a shipping container. He sat in the blood of his mother by himself for three days. At the crime scene, Harry Morgan, a police officer from Miami Metro, took in Dexter as his own son, since Dexter was now an orphan.

Because of Dexter’s terrifying event in the shipping container, a “Dark Passenger” developed in his mind. This was his need to kill. Harry later found out about Dexter’s “Dark Passenger”, and came up with a code to help Dexter not get caught. This is what helped Dexter not get caught and arrested for doing what he needed to do, and he was kind of doing the universe a favor in some way.

“My favorite season is number six. I love the story behind it, about the biblical killings like Revelations in the Bible.” says Cameron Wright, 8th grade.
Each season has its own main antagonist, a serial killer Dexter is looking for. In the first episode of the season, the killer is introduced, and the last episode of the season is when Dexter kills the antagonist. In season one, Dexter is looking for the Ice Truck Killer. Season two is the Bay Harbor Butcher, which coincidentally is actually Dexter, but he tries to make the police look for someone else. In season three it is the Skinner, season four is the Trinity Killer, season five is Jordan Chase, season six are the Doomsday Killers, season seven is Isaak Sirko and season eight is the Brain Surgeon.