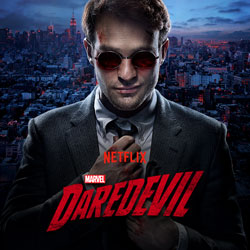 The Netflix series Daredevil is about a New York lawyer, Matt Murdock, who is visually impaired but can still “see”. He uses his heightened senses to fight street crime without the knowledge of his best friend and business partner Foggy Nelson. The entire show is based off of the Marvel Comic Book character Daredevil. Daredevil is a must-see for anyone who enjoys superhero movies or crime shows.

Michelle Danglade, 8th grader, says she absolutely loves Daredevil. Danglade says that she can see a bit of herself in Daredevil, even though he’s a superhero. “He’s kind of relatable in a way, not like most of the other superheroes you see who are lab experiments gone wrong or from other planets. Matt is just a regular man, standing up for the people in the city he loves,” said Danglade.

What Danglade says is true. Daredevil doesn’t defend his city for glory, he does it because no one else will. This is what makes him so much better than the other superheroes, he wasn’t “designed” to fight crime, yet he does it anyway.

Daredevil may be a show about a city in peril, but it has its light-hearted moments. Matt Murdock’s business partner and best friend, Foggy, is a charming addition to the show. Bailey Garza, 8th grader, says the adorable lawyer is her favorite character. “…he’s, like, the funny one in the show. Everything is so serious, but Foggy isn’t,” said Garza.

Another beloved character is Claire Temple, a nurse who aids Daredevil when he’s injured. She knows Matt’s secret, and because of that she becomes not only his doctor, but also his friend. “Claire’s a nurse assisting a blind ninja, but she’s ok with that. I think that’s pretty amazing,” said Danglade.

Daredevil is refreshingly different because it follows a regular man trying to find the balance between his two worlds. The show may not be all that popular within Dobie, but it certainly has its fans, and that’s all that matters. As Garza said, “…it’s action-packed, super cool, and TOTALLY binge-worthy!”

Matt Murdock fixes his tie while standing in front of the city he lives in and defends.