Personal View: The Walking Dead is the best show 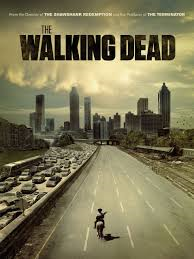 The poster was made to inform people of the premier of The Walking Dead in the U.S. on October, 2010. The poster really captured what the first season had in store for the viewers. “I am a zombie-slayer so yes, it is [hilarious]. People often say, ‘Do you think it struggles to break out of the genre of horror?’ And I say, ‘It is not a horror; it is a Western. That’s what we do.’ This is like an apocalyptic Western,” shares Andrew Lincoln,according to EXPRESS.

The Walking Dead series has the highest total viewership of any series in cable television history. Because of this, The Walking Dead caught the eyes of Netflix. On Oct 7, 2011, Netflix Inc. and AMC Networks Inc. reached a multi-year licensed agreement that made AMC’s The Walking Dead, available to Netflix members in the U.S. and Canada.

The Walking Dead is based on a comic book of the same name by Robert Kirkman, and developed into a TV series by Frank Darabont. The show is set in a Zombie Apocalypse world where Rick Grimes, played by Andrew Lincoln, wakes up from a coma. Full of questions Rick sets out to find his family. He soon finds his son and wife with other survivors. Rick becomes the leader of the group and they set out in a game of survival through the new world.

“I would have to say that Rick is my favorite character, because he keeps everything together, he is smart, and he has been through so much. He is the best leader you could possibly have in that situation,” said Madison Byrum, 8th grader. The show has so many characters so you have a big supply of who you choose to be your favorite.

All the characters have their own personalities and backgrounds. My favorite character would have to be Carl Grimes, played by Chandler Riggs, because he reflects someone my age having to go through a WORLD changing event. He is brave for a kid that young and has many life or death responsibilities. That bad thing about the show ,though, would have to be that characters die like every episode. That makes choosing a favorite character tricky.

“ I don’t watch The Walking Dead because I don’t like zombies, jump scares, or anything that will make me go ahh,” said Brooklyn Moore, 8th grader. The Walking Dead can be considered scary to some. Since there are so many deaths in the show some scenes can be gruesome, but not everyone finds the show scary. Byrum finds the scare factor of the show to be a 4 ,in 10 being scary and 1 being not scary.

The Walking Dead is the best show to involve any kind of apocalypse or just the best show in general. More people should watch the, because it’s so much more than just zombies. Byrum says that the best thing about the show is all the plot twists that occur.

If you have finally decided to watch the show, season 1-6 is on Netflix now. Grab your popcorn and go binge watch all the seasons. You can expect season 7 on Netflix soon.