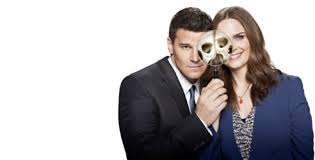 The reason why Bones is my favorite show/series is for these three reasons: intriguing, keeps me on my toes and mystery.

The main characters in the story are: Dr.Temperance Brennan played by Emily Deschanel, she is the lead Forensic Anthropologist at the Jeffersonian and is a published author. Her personality is very uptight and she is very rational; she likes to go by the name of “bones” and has a secret crush for Seely Booth.

FBI agent Seeley Booth played by David Boreanaz, is the total opposite of Temperance. He is easy going, and secretly has a crush for Temperance maybe that’s why they say “ opposites attract”

Angela Montenegro played by Michaela Conlin, Best friend of temperanceworks as a designer for human skulls at the Jeffersonian Institute. Her personality is very sensitive and she loves romance.