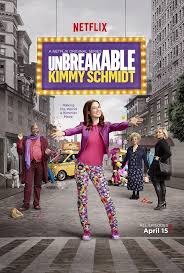 ‘Unbreakable Kimmy Schmidt’ takes place in New York city but in the first season it has a few flash backs into the past when she was kidnapped in Indiana at the age of 15 by a reverend which explains why Kimmy got to where she is now. The flash backs really help fill in what information they don’t tell us.

The show has a ton of hard working talented actors and actresses which really make the show what it is. Like Ellie Kemper who plays the main character Kimmy Schmidt and Tituss Burgess who plays the supporting character Tituss Andromeda in the show.

The show has two seasons and a third one is being released May 19th. There have been some opinions saying that the show got worse in season two. “My opinion on the ‘Unbreakable Kimmy Schmidt’ is like It’s funny and cool and stuff but it kind of went downhill at the 2nd season like it took too long to make a new season that I lost interest,” said Davanya Tweggs, 8th grader.

The show was made by Tina Fey which explains why the show is so hilarious, Tina Fey produced and wrote “30 Rock” which was a very successful show which ran for 7 years from October 11th, 2006 until January 31, 2013. Tina Fey was also on SNL, which has 42 seasons, which is still running now even though she isn’t on it anymore.

It really knows what the do to make you fall out of your chair laughing, but it’s also just an amazing show in general. “I would definitely recommend this show to someone because most people in the world are depressed and Unbreakable is such a good show to watch that it’ll make you feel better,” said Delaney Costello.

The show is about a woman named Kimmy Schmidt who originally lived in Indiana, but she was captured in a van by a Reverend at the age of 15 and put into a bunker with three other woman (teenagers at the time) she lives in that bunker for 20 years being told by the reverend that the world had ended and that he was keeping them safe.

When in reality he was just using four women for work. Kimmy finally get enough courage to open the door to freedom and she is found by police and the four girls are sent on there ways in the real world. Kimmy starts her new life in New York City and soon meets a landlord named Lillian and a man named Tituss. She soon gets a babysitting job and that’s where the show takes off.

The comedic show is just so entertaining and they really did try their hardest when making and developing the show. That’s why I enjoy the Unbreakable Kimmy Schmidt so much. From its talented and amazing actors and actresses to the comedic genius behind the camera the show has it all and It’s become a smash hit in the Netflix community.