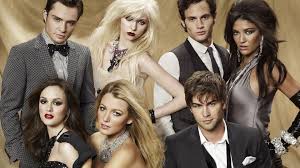 “Gossip Girl” (2007-2012) is a show that follows the lives of privileged teens living in the Upper East side of New York. Serena Van der Woodsen (Blake Lively) mysteriously returns from disappearing to boarding school, and stirs up speculation and drama with her return. This show is one of the best rated teen dramas in its time, and one of the best shows in my opinion.

Blair Waldorf (Leighton Meester), Serena’s former best friend and the queen bee at the center of their chess game, becomes jealous of all the attention Serena is receiving and decides to sabotage her.

In the beginning, Blair is dating Nate Archibald (Chace Crawford), the ‘king’ of their private school, but all changes when Serena comes back into the picture. Nate’s best friend Chuck Bass (Ed Westwick) is the exact opposite, the school bad boy and causes trouble wherever he may go. When Serena comes back into town an outsider, Dan Humphrey (Penn Badgley) comes into the picture and shakes up the social scene at Constance. Dan’s younger sister Jenny Humphrey (Taylor Momsen) gets in with Blair and her friends and changes the way things work at Constance.

“I mainly watch Gossip Girl as a binge show. It’s funny and I like it because of all the drama”, Kayla Reisner, 8th grader said.

Reisner said that Blair doesn’t deserve Nate or Chuck until she can learn to love herself. “My favorite episode is when Chuck’s dad moved in with Serena’s mom after they got married. It’s hilarious to see how Chuck is messing with Serena”, Reisner said.

“If my best friend cheated with my boyfriend like Serena did, it would be hard not to forgive her. I would hold a grudge for a while but I would eventually let it go.”

“My best friend and I started watching Gossip Girl together. Every Friday, we would go over to each other’s houses and watch it”, Camden Weber, 8th grader said. Weber said that her favorite character is Serena because of the situation she’s in, and how she can relate to it. “Blair and Chuck are good together because they have the same personality because they’re both stuck up,” Weber said.