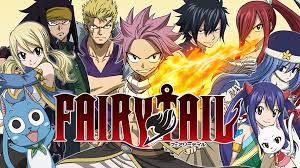 “Fairy Tail” is an anime (Japanese animation) produced by A-1 Pictures and Satelight was released in Japan on October 12, 2009. I would recommend this show to people who haven’t seen anime because it would give them a great first impression to anime.

“This is the first anime show that I have watched, it was amazing,” said Alina Bell, 7th grader. Many students like to watch this show, it’s a series/movie there are eight seasons and two movie it’s a mix of both.

“This show is the G.O.A.T. (Greatest of all time) it makes me want to be a mage,” said Vinnis Hutchinson 7th grader. Genre Action, Adventure, Comedy, Fantasy. “Fairy Tail” is an ongoing weekly manga written and illustrated by Hiro Mashima.

The series was first serialized in Weekly Shōnen Magazine on August 2, 2006. The individual chapters are collected and published in tankōbon volumes by Kodansha, with the first one being released on December 15, 2006.

“I love it when master Ur says, ‘If that monster is your Darkness, then I have reason to fight it,’” said Jazmeen Adames. “It’s so deep and mysterious to me.”

Lucy is a very rich young lady but she hides it from the people at her new guild, she’s always dreamed of being in the fairy tail guild since she was very young. Her mother was a Celestial Spirit Mage and her mother passed down her keys to Lucy it happened before her mother died, and her father is only busy with work he didn’t even say happy birthday to her. When she was a older, Lucy ran away from her past and started new in Fiore where the Fairy Tail guild is. “A flower can’t choose the place where it blooms, and a child can’t choose the parents she’s born to,” said Emma Baker, 7th grader.

This epic series takes us through all the dangers that the members of fairy tail face and eventually overcome through mutual love and friendship.“My favorite quote from the show is: ‘It’s not the goodbyes that hurt, its the flashbacks that hurts,’” said Lenayah Hawthorne, 7th grader.

Lucy, an aspiring Celestial Wizard, becomes a friend and ally to powerful wizards Natsu, Happy, Grey, and Erza, who are part of the (in)famous wizard guild, “Fairy Tail”. The Fairy Tail Guild (A guild is an organization of persons with related interests, goals, etc., especially one formed for mutual aid or protection. Any of various medieval associations, as of merchants or artisans, organized to maintain standards and to protect the interests of its members, and that sometimes constituted a local governing body.)

“Fairy Tail’s” original location was situated in the Kingdom of Fiore, on the southern coast of the country in Magnolia Town where it was the only guild (until the arrival of Twilight Ogre).

“Fairy Tail” is a fantasy twist on medieval times. “Fairy Tail the Movie: Phoenix Priestess” (Original Sound Track) is the soundtrack from the film of the same name. The music for this OST was composed and arranged by Yasuharu Takanashi. It released on August 18, 2012, by Pony Canyon.