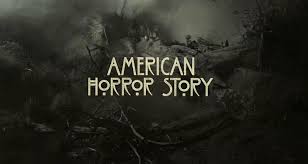 “American horror story” also known as “AHS” is a 6 season show so far and a great one at that. This series of shows is about many different characters and topics and themes. It was created and aired October 5, 2011. Every year they publish a new season around the same time in October they do this for the whole horror effect of halloween.

I think that “American Horror Story” is an amazing show because they have so many different topics and nothing is really the same other than the actors. I can rate this show a 10 out of 10.

Murder house is the great season one. In this season, a family of 3 moves into a new home in a different state. Violet Harmon (played by Taissa Farmiga)  teenage daughter of Ben Harmon, isn’t your preppy high school cheerleader no, she’s more of ur darker mysterious girl. The stay at home wife Vivien Harmon (Connie Britton) notices many odd things happening around about the house and isn’t too happy about it. Dr. Ben Harmon (Dylan McDermott) is not only a father and a cheater, but also an home psychiatrist. He talks with Tate Langdon (Evan Peters) about his problems and while there for many days in a row he finds a way to help his problems but not with talking about them. He finds a way to fix his problems by falling in love with his shrink, Ben Harmon, daughter Violet. It is a beautiful but odd love story even though to many problems are occurring around them.

Asylum season 2 is quite insane much like many people in the asylum. It all starts with a man, Kit Walker (Evan Peters), with an incredible story after being abducted by aliens and lives to tell about it. After witnessing his wife and kids being abducted as well and never coming back he goes and tells other people and eventually gets put into an asylum. In this frightening place there are many different things nobody would ever want to experience. There is the therapist on the mission to make Kit better Oliver Thredson (Zachary Quinto). The inmate with an axe to grind Grace Bertrand (Lizzie Brochere). Dr. Arthur Arden, a man of science and conviction or is that all he is? Sister Jude a steadfast disciplinarian, with hidden appetites. Last and surely not least the girl that falls in love even if it might be the death of her or should I say others?

This coven of witches is very very odd. These are people you do not want to mess with. It has been decades since the tribal times and pretty much all of the salem witches are gone. This group of witches are sent to a boarding school to protect themselves from all other who would destroy them.

The owner of the school and the leader of the group Fiona Goodie, she isn’t much of a goodie. But that’s not the part they should be worried about, it’s the witches. All of the witches have different strengths and weaknesses and they all can be life threatening.

Madison Montgomery (Emma Roberts), teen movie star nobody really like cause she is very cocky with her fame. Nan (Jamie Brewer), a clairvoyant witch with a master of eavesdropping. Queenie (Gabourey Sidibe), a human voodoo doll who’s torn between sides. Cordelia Foxx (Sarah Paulson), a daughter of a supreme can be very very powerful. Zoe Benson (Taissa Farmiga), a girl whisked away by a killer secret. Kyle Spencer (Evan Peters), there’s always a love story behind the tragic witches truths.

Freak Show is quite crazy but they aren’t just a bunch of crazy clowns even though there is one Twisty the clown (John Carroll Lynch) just misunderstood and murderous. In this season is a group of odd people much like Jimmy Darling (Evan Peters) aka Lobster Boy because his fingers happen to be attached. His mother is the bearded woman Ethel Darling (Kathy Bates). Bette and Dot Tattler (Sarah Paulson), the conjoined twins with the same body but different hearts. Maggie Esmerelda (Emma Roberts), the fortune teller whose heart isn’t as cold as her readings. With others that don’t quit get along with each other as well as you would think. Especially with civilians treating them like they aren’t even human.

Hotel Cortez is a hotel you know for sure you won’t be alone in with all the spirits in the creepy place. There are many different scares in this hotel many different personalities. Everyone who just so happens to be so unfortunate as to stay in a room at this hotel dies and there spirit can never leave. Much like Sally McKenna (Sarah Paulson), a ghost junkie that is a permanent resident. But there aren’t only just spirits there are also deadly creatures like Elizabeth (Lady Gaga).

Roanoke now if you’re a true horror fan you have to know at least something about roanoke it’s a given. After a disturbing incident a couple Shelby Miller (Sarah Paulson) and Mat Miller (Cuba Gooding)move into a perfectly built home made in the 18 century. But the house is quite close to the site of Agnes Mary Winstead (Kathy Bates) aka “The Butcher” colony’s disappearance and with many many horrific things happening the couple begins to see a darkness beneath the surface.

I say it is a must watch for all those horror fans out there take my word on it. There is really much love for all of these charters in my heart.